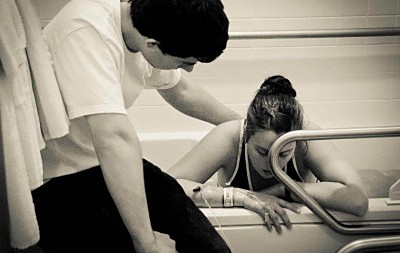 A saline lock (sometimes called a “hep-lock” for historic reasons), is an intravenous (IV) catheter that is threaded into a peripheral vein, flushed with saline, and then capped off for later use. This way you are not hooked up to an IV pole, but the nurses have easy access in case you need something injected into your vein later. 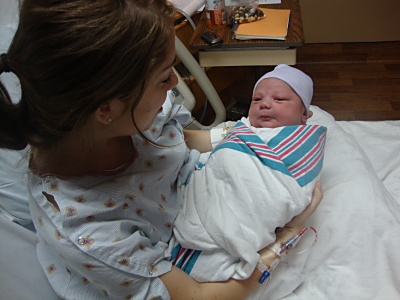 Bridget and her 11 pound son shortly after birth. Bridget was GBS positive and had to have 2 doses of antibiotics through a heplock or saline lock. In between doses she was unhooked from the IV pole.

May 30, 2012 by Rebecca Dekker, PhD, RN, APRN
© Copyright Evidence Based Birth®. Please see disclaimer and terms of use.

So why might a saline lock be used during labor and delivery?

It can be used to administer IV pain medications, anti-nausea drugs, or antibiotics (in cases of Group B strep). If you receive Pitocin for induction or labor augmentation, then Pitocin has to be given through an IV infusion—and the saline lock will be hooked up to tubing and an IV pump/pole to continuously deliver the Pitocin through your IV.

What else? The saline lock can be used to hook you up to routine IV fluids (generally considered an unnecessary intervention as long as you are allowed to drink). You may be given some extra fluids through the saline lock if you become tired—this may give you a bit of a “boost” and may also reduce nausea.

If you request an epidural, you will automatically get a saline lock because an epidural is a higher-risk intervention and you must have IV access in case something goes wrong. If you have an epidural you may also need extra fluid injected into the IV to keep your blood pressure from dropping (a common side effect of epidurals is low blood pressure, which can adversely affect mom and baby).

A saline lock is also used commonly after birth to inject Pitocin to help deliver the placenta—however, this intervention is not always necessary and this medication can also be easily delivered through a one-time injection in the muscle.

Finally, a saline lock could be accessed if you have excess bleeding after birth, also known as post-partum hemorrhage. Nurses could give you IV fluids and (rarely) blood products to restore your body’s fluid and blood volume if you lose too much blood after birth. Overall, the post-partum hemorrhage rate in the U.S. is 2.9% (29 women out of 1000), and the percentage of women who require blood transfusion for hemorrhage is even smaller—only 0.26% (26 women out of 10,000.) (Bateman & Berman, 2010).

So given all this evidence, we can say that for women who plan a vaginal delivery and do not have any of these risk factors, the risk of post-partum hemorrhage is very small (much less than 2.9%), and the risk of needing a blood transfusion is even smaller (probably much, much less than 0.26%)

In many of the situations I discussed above, like with epidural use, it is clear that an IV is necessary. But what about a woman who desires an un-medicated birth? And what if she is at low risk for post-partum hemorrhage? In that case, a saline lock is often seen as a compromise between an OB who is used to administering lots of interventions during labor and the woman who wants an un-medicated birth. An OB might say to a patient, “You don’t have to be hooked up to IV tubing with fluids/medications, but I require all my patients to at least have a saline lock just in case.”

Well, there is basically no evidence. No randomized, controlled trials have ever been done to look at outcomes in women with saline locks during un-medicated births versus women without saline locks during un-medicated births. We don’t even have any observational studies. I found one really interesting medical article about the issue that was written more than 20 years ago. But although it gave me food for thought, it didn’t really give me any hard-core evidence. So I started talking to people and emailing people about my question to find out various people’s clinical opinions.

One of the first people I asked was a friend who is an Emergency Department nurse. My question for her was, “Most OB’s insist that their patients have a saline lock, ‘just in case.’ But my question is, just in case what? In the extremely unlikely event that an OB patient without a saline lock would crash (nurse-language for a patient going downhill very quickly), what do you think the scenario would look like? Would they have difficulty inserting an IV during the emergency?”

“When we are coding (resuscitating) someone without an IV, it is #1 very stressful. How long it takes to insert the IV varies, depending on the patient and the RN or MD. However, if they are intubated (breathing tube placed down the airway) we can deliver meds during a code via their tube while we are attempting to establish an IV or deep line. It is always best to have an existing IV on a “higher” risk emergency department patient. Other factors will also influence how difficult it is to place an IV—such as age or health status.

With the OB patient crashing my concern is not only for the mother but the infant as well. You also need to consider the staff’s ability to handle such a stressful situation and environment—this is not “norm” for them (as it is in the ED). If a patient crashes in labor and delivery, if the resources are not as abundant or if the staff is not very skilled in starting IV’s, then it can become ugly quick. I think a pound of prevention is worth a pound of cure.  My question is this…how inconvenient is a saline lock compared to the risk of something going wrong? Lastly, it is the patient’s right to refuse an IV if they do not want one.”

I asked another very experienced registered nurse about that last comment—about it being the patient’s right to refuse an IV. I told her this nurse’s comments, and gave her a possible scenario in which an OB patient refused a saline lock. What would you do?

“What would I do? Well, I would definitely respect their right to refuse the saline lock. I wouldn’t put a saline lock in them—that would be assault. I would let the doctor know, though. I believe that if that happens, then it is an issue between the doctor and the patient. Would I treat the patient any differently? No, I would treat them just the same; I wouldn’t be upset with them or anything.’

Okay, so now I needed to get an opinion from a labor and delivery nurse. Enter my friend, who worked as a mother-baby nurse for many years, mostly taking care of women during the post-partum period.

“When I got patients from labor and delivery that had a saline lock that was never used or had just been used for Pitocin after delivery or for anti-nausea drugs during labor, I took them out as soon as possible for them. Usually that meant within 8 hours of delivery, I always made sure they were able to get up to the bathroom a couple times and their first couple checks did not have a lot of bleeding.

When I did have a mom hemorrhage or have a heavier than normal flow after delivery, it was very nice to have a saline lock to use for Pitocin and fluids that were usually needed. The hemorrhages I had when they did not have a saline lock always seemed a bit more hectic with that added step. However I’m not sure if the outcomes were ever that different, did those women who didn’t have a saline lock lose more blood and then have a lower Hemoglobin or be more likely to need blood later?”

Finally, I talked to Dr. Shannon—our family medicine physician friend who is a consultant on this blog.

“Automatically placing an IV in a laboring patient is a “protocol” because of hospital liability issues. Of course, this is approaching the issue from the perspective that a laboring woman is a disaster waiting to happen. I don’t think it is right to think of laboring women in this fashion as this is a natural process. So, I am always quick to question any procedure that is done “just in case the worst could happen”. (Such as not letting a laboring woman eat or drink “in case they need an emergency C-section under general anesthesia” or having a continuous fetal strip “just in case the baby crashes”).

There are studies on the need for IV fluids in labor, and there is nothing that shows that women need IV fluids in labor. Usually I let them eat or drink as they feel the need to. If a woman is approaching the birth of her baby she usually doesn’t feel like eating much anyway, and I warn her that whatever she eats she may see coming back up. But as far as the actual placing of an IV, I think this can be taken on a case-by-case basis. If you think about it, it would be silly to place an IV in every baby that is born as soon as they emerge from the womb, so why in every pregnant woman?

Here’s the bottom line: I think if a woman with an uncomplicated pregnancy desires an un-medicated birth and is well prepared for that (has a birth plan and labor support, has practiced and has a method for natural labor) and has thought through the IV process and decides against it, I would support that decision. For everyone else I would routinely order an IV that is saline locked and then a clear liquid diet and tell her to eat whatever she wants.”

Here are some benefits and risks you may want to think about:

Benefits of having a saline lock:

Risks of having a saline lock:

Just for fun, let’s do a poll and see what you all think.