Why U.S. Hospitals use Eye Ointment for Newborns 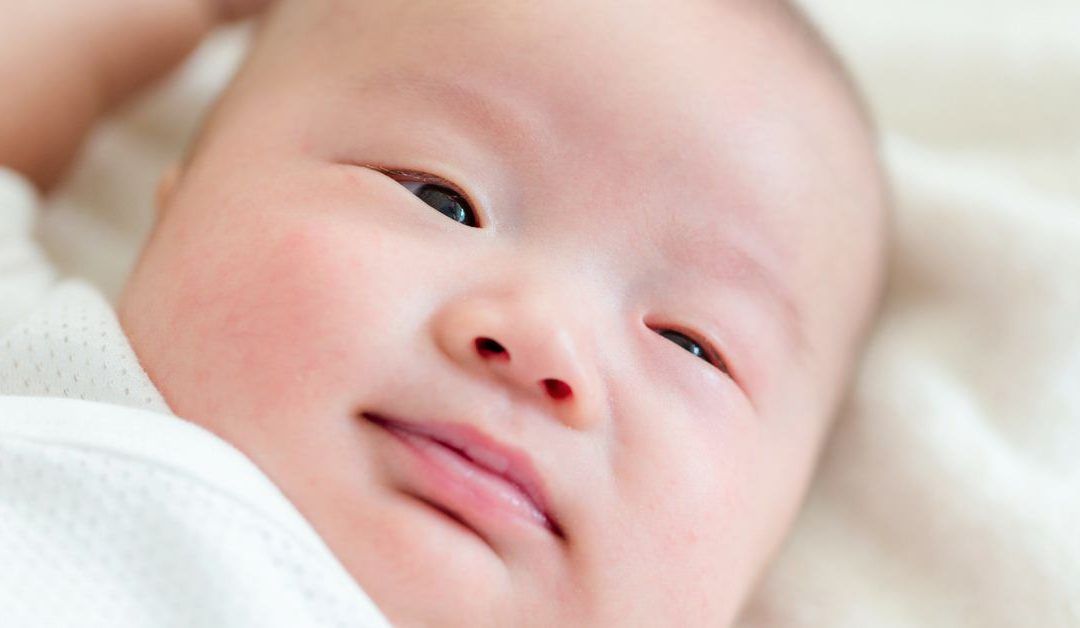 Today’s video is all about why hospitals in the U.S. put eye ointment in the eyes of newborn babies. You can read our disclaimer and terms of use. 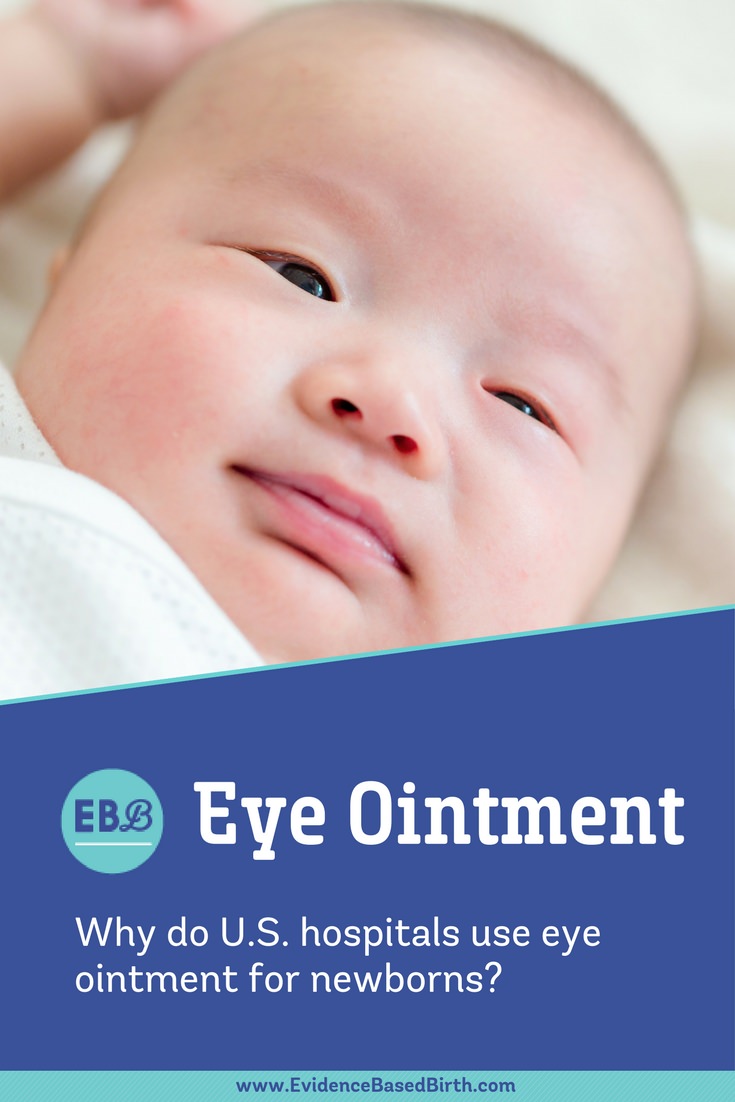 Hi everyone. In today’s Q and A video, we’re going to talk about why so many hospitals put ointment in babies’ eyes after they’re born.

Hi. My name is Rebecca Dekker and I’m a nurse with my PhD and I’m the founder of Evidence Based Birth.

I released these three free video lessons in 2014 to celebrate the launch of my online class for professionals all about vitamin K and eye ointment. This video was originally recorded in 2014 and today I’m updating it in 2019.

Eye ointment. So here’s the deal. Around the world, there is a lot of variation between countries with regards to whether or not they routinely give eye ointment to all newborns. For example, eye ointment is recommended for ALL newborns in Brazil, France, Italy, Slovenia, Spain and Turkey.

There is some debate about giving eye ointment to all newborns in the United States. The U.S. Preventive Services Task Force just releases a 2019 statement reaffirming its recommendation from 2011 to give all newborns the eye ointment. However, the American Academy of Pediatrics no longer recommends universal prophylaxis in their 2018 Red Book. They call for reevaluating state mandates and opt for a prevention strategy of increased screening/treatment for gonorrhea. But they do say that routine eye ointment is still appropriate in regions where gonorrhea is widespread and there are low rates of prenatal screening and treatment.

Eye ointment is not routinely done in most European countries, including England, and it’s not done in Australia. In Canada, their pediatrician organization recently put out a statement saying that Canada should throw out the laws that require mandatory eye ointment for all babies and instead use the same screening and treatment method that is used in many other countries.

People outside of the U.S. see pictures of our newborn babies and say, “What’s that weird goopy stuff in their eyes?” Seriously, they think we’re crazy. So why do U.S. hospitals put ointment in newborn babies’ eyes? Well, the ointment is a topical antibiotic called erythromycin and it’s supposed to prevent an eye infection from gonorrhea and chlamydia called, and this is a really intimidating word but this is the big word that is used, ophthalmia neonatorum. It basically means pink eye in a newborn.

Now, all of you have probably had pink eye at some point in your life. Pink eye is inflammation of the lining of the eye and it can be caused by viruses, bacteria, irritation, or chemicals. Most of the time, pink eye is pretty benign even though it’s uncomfortable. But it’s not usually a big deal. It’s easily treatable and in many cases, like with viruses, it goes away on its own.

The problem with pink eye is if a baby contracts gonorrhea from their mother during birth, these are sexually transmitted infections, then this can cause a dangerous type of pink eye. That, if left untreated, can lead to blindness in about 3% of babies who are affected by this type of pink eye.

The Centers for Disease Control in the United States said in 2017 that young adult women have the highest rates of gonorrhea, with rates between 6 to 9 cases per 1,000 women. These rates may be higher or lower in other countries. Much of the time, these infections do not show any symptoms so it’s quite possible to be infected and not know it.

Let’s rewind a bit to the late 1800’s. More than a hundred years ago in 1880, a doctor named Dr. Crede discovered that if he put a silver nitrate ointment in the eyes of newborns, he could prevent nearly 100% cases of blindness from pink eye in newborns. This was a pretty big discovery at that time.

But let’s think for a minute. What’s different about the year 1880 compared to today? Well, number one, up until the 1940’s, they didn’t have any antibiotics. So if a baby developed this dangerous pink eye from gonorrhea, they couldn’t treat it. The infection would just rage on, potentially causing blindness.

Number two, they didn’t really have the ability to screen for gonorrhea. Many mothers had gonorrhea back then. It was much more common then than it is today. Plus, because women with gonorrhea might not have any symptoms, this meant that women with gonorrhea could give birth to babies and pass on the infections without knowing it. In fact, back in 1880, 1 in 10 babies caught this sexually transmitted infection from their mothers. Because we didn’t have antibiotics, we couldn’t treat the mothers and we couldn’t treat the babies. The infection was everywhere. It was crazy.

The third reason 1880 was different from today is because they eventually realized that silver nitrate was really, really painful. So once antibiotics were developed, they switched from silver nitrate to erythromycin.

The problem is about 1 in 4 cases of gonorrhea is now resistant to erythromycin. A lot of countries have switched to something called povidone-iodine, which is a disinfectant drop that’s much cheaper and possibly more effective than erythromycin. However, povidone-iodine is not available in the United States.

Increasing antibiotic resistance is part of the reason why people in England, Australia, and so many other countries don’t use eye ointment in babies anymore. With adequate prenatal care, there’s really no need to. Instead of giving eye ointment to all babies, they’re screening all pregnant people for gonorrhea and treating them, if necessary, to rid them of the infection. And their partners are also being treated so that they can avoid reinfecting the mother.

Another reason so many countries don’t use eye ointment anymore is because they can treat the baby’s eyes if they do develop an infection. When there is easy access to healthcare, it is less likely that infections will go untreated and cause harm.

On the other hand, some countries (or regions within countries) may still benefit from using the eye ointment or the povidone-iodine. The eye ointment is helpful when there are high rates of gonorrhea, and when pregnant people are less likely to get screened or treated because they don’t have access to prenatal care. So if someone’s not getting adequate prenatal care, then the screen and treat method won’t work for them. In that case, the eye ointment would be the better approach.

That’s it for today’s video. If you’d like to learn more, including the pros and cons of the ointment and whether or not it can work to prevent eye infections caused by staph infections, I’d like to encourage you to visit the EBB signature article on eye ointment in newborns.

Also, if you end up, after talking with your care provider, deciding to decline the ointment, make sure you check the laws in your state. Some states in the United States require mandatory eye ointment for all newborns. Yes, that may sound crazy, but it’s true. Some awesome birth professionals and parents have actually joined together to work to get these laws reversed. I’ll post a few links below to show you some examples of how they got their laws changed in their states. That’s it for now. Thanks and bye.