Positions during Labor and their Effects on Pain Relief

Today’s video is all about positions during labor and their effects on pain relief. As a reminder, here is our disclaimer and terms of use.

Hi, everyone! In today’s video we’re going to talk about movement and positioning during labor for pain management.

My name’s Rebecca Dekker. I’m a nurse with my PhD and the founder of EvidenceBasedBirth.com. I’ve written extensively about the use of birthing positions and the evidence on different positions that you can give birth in. You can find that info at EBBirth.com/birthingpositions.

However, today I’d like to talk with you specifically about movement and positioning that can be used during both the first stage of labor and the second stage of labor during the pushing phase to help manage pain. Researchers have proposed several different ways that upright positions and mobility can help benefit normal labor and birth.

How could upright positions benefit normal labor and birth?

First of all, when you’re upright, gravity can assist in helping bring the baby down. Also, when you’re upright you’re not laying on your aorta, which is the largest blood vessel in your body. If you’re lying on your back on your aorta, it could compromise blood flow and oxygen to your baby. Also, when you’re upright, the uterus can contract more strongly and more efficiently, and help get the baby in a better position to pass through the pelvis. MRI evidence has shown that the outlet of your pelvis actually becomes wider if you’re squatting or kneeling, or if you’re in a hands and knees position. Finally, researchers have found that upright birthing positions increase the mother’s satisfaction and lead to more positive birth experiences.

However, despite these potential benefits, most people giving birth in U.S. hospitals report giving birth on their backs or in a semi-sitting position where they’re laying in bed with the head of the bed raised up. A small minority push and give birth in other positions such as side lying, squatting, sitting on a special birth seat, or hands and knees position. In contrast, I recently interviewed a home birth midwife in the U.S. who said that the majority of her clients spontaneously choose to give birth in the hands and knees position.

What do randomized, controlled trials say about movement and positions during labor?

In 2013, researchers combined info from 25 randomized, controlled trials with a total of more than 5,000 participants into a Cochrane Review. They wanted to look at the effects of mothers’ positions and movement during the first stage of labor, before pushing. In these studies, laboring people in hospital settings were randomly assigned (like flipping a coin) to either be in upright positions or moving around, or to laying on their back or staying in bed.

Second stage of labor for people without epidurals

In 2017, Cochrane researchers combined the results of 32 randomized, control trials with more than 9,000 birthing people in hospital settings to look at the effects of upright positions during the second stage of labor, which includes pushing and giving birth to the baby. In these studies, people giving birth without epidurals were randomly assigned to either being in an upright, pushing position or a lying down position.

We also found one more randomized, control trial that was published in 2017 but was too recent to be included in the Cochrane review. This study involved 102 first-time mothers who were giving birth without epidurals in the country of Turkey. The mothers were randomly assigned to one of two groups: they could either push and deliver in a standing or squatting position using a squat bar, or push and give birth in the lithotomy position, which involved lying on their back with their feet in stirrups and the head of the bed raised about 45 degrees.

They found that the people who used the upright positions, such as standing and squatting, had a shorter second stage of labor by about 34 minutes on average. They also reported less pain and  more satisfaction with their birth experience compared with the group that pushed and delivered while laying on their back in a bed.

Second stage of labor for people with epidurals

Another meta-analysis of five randomized control trials with 879 participants total looked at the effects of upright positioning during pushing for people with epidurals. Unfortunately, they did not find any useful data on mothers’ experiences with pain relief or satisfaction with upright positions during labor to include in the review.

There was one study called the Swedish Birth Seat Trial that was not included in that Cochrane meta-analysis since the birth seat group was compared to any other position, and the other positions were not classified. It was a large randomized, controlled trial that randomly assigned mothers to either give birth on a “Birthright” birth seat or in any other position. About half the people in this study had epidurals.

They found that people who gave birth on the birth seat reported greater satisfaction and were more likely to report that they felt powerful, protected, and self-confident.

There’s also been some research on using birth balls during labor. The birth ball is also known as a fit ball, exercise ball, or Swiss ball. It was first introduced by physiotherapists in 1963 to help with back pain and it started being used in childbirth in the 1980s.

In 2015, researchers combined four randomized, controlled trials in which people were randomly assigned either to have the use of a birth ball during labor or not. There were a total of 220 people without pain medications who were in these studies. In one of the randomized trials they started educating women earlier in pregnancy, at 30 to 32 weeks, about how to use a birth ball during pregnancy and labor. In the other studies the birth ball was only introduced during labor.

There have been a lot of fun videos making their rounds on social media all about dancing during labor. There’s actually been a randomized, controlled trial on this. In 2014, researchers in Iran randomly assigned 60 first-time mothers giving birth without pain medication to either dance during labor or not. Dancing during labor involved standing with their arms around their partner’s neck, tilting their pelvis and rocking their hips back and forth or around in circles while their partner massaged their back and tailbone. They had to use the dancing position for at least 30 minutes.

The researchers found that people who used dance labor had lower pain scores and higher satisfaction with their birth compared to people who didn’t dance and received normal care (which did not include pain medications).

What are some of the practice guidelines on positions during labor?

Let’s quickly talk about professional guidelines or opinions on movement and positions during labor.

The American College of Obstetricians and Gynecologists

In United States, The American College of Obstetricians and Gynecologists (ACOG) says that for most people giving birth, no one position needs to be mandated nor prescribed. They talk about the fact that many care providers encourage a lying down position during labor even though this position has known side effects including lowering the mother’s blood pressure and increasing the chance of abnormal fetal heart rates. They go on to talk about continuous electronic fetal monitoring, which is one of the main reasons that people in the United States stay in bed during labor- because they’re hooked up to the monitor. They state that continuous electronic fetal monitoring has not been shown to improve birth outcomes for low-risk women and that hospitals should consider training their staff to use intermittent monitoring with a handheld doppler device (hands-on listening), which would allow women more freedom of movement to aid comfort.

The American College of Nurse Midwives, the Midwives Alliance of North America, and the National Association of Certified Professional Midwives all state that freedom of movement during labor and women choosing their own birth position is a critical component of normal physiologic birth.

The Royal College of Midwives

The Royal College of Midwives in the United Kingdom encourages the use of active and upright positions during labor. In their guidelines, they encourage midwives to be proactive in demonstrating and supporting women in a variety of positions. They say that women often choose to do what’s expected of them and, since the most common image of a woman giving birth is lying on her back, that might be the position that women choose because they don’t realize that there are other positions that they can move around and be comfortable in. They go onto say that the environment is key to encouraging freedom of movement and that there should be a variety of furniture and props in the room to encourage upright positions during labor. They also recommend that midwives support mothers with suggestions for how they can still be mobile and remain upright even if they have interventions such as IV fluids or continuous electronic fetal monitoring.

So, the bottom line is that people who are giving birth should be encouraged to labor, push, and give birth in whatever position they find most comfortable.

Upright and active positions during the first stage of labor are linked with much shorter labors and less need for epidurals. When it comes to pushing and giving birth, the evidence at this point is not strong enough to recommend one specific position over another, although lying on your back or sitting on your tailbone appear to be less helpful to normal birth. For people without epidurals, pushing and giving birth in an upright position is linked with lower levels of pain and higher satisfaction.

Birth balls and dancing during labor have also been shown to be effective, although there isn’t a ton of evidence at this time.

The evidence on positions during labor is less clear for people with epidurals. However, a large randomized trial from Sweden showed an increase in maternal satisfaction with sitting on a birth seat. That’s it for this video. I hope you enjoyed this information. Feel free to browse our other videos all about pain management during labor and birth and to check out our signature article on birthing positions at EBBirth.com/birthingpositions. 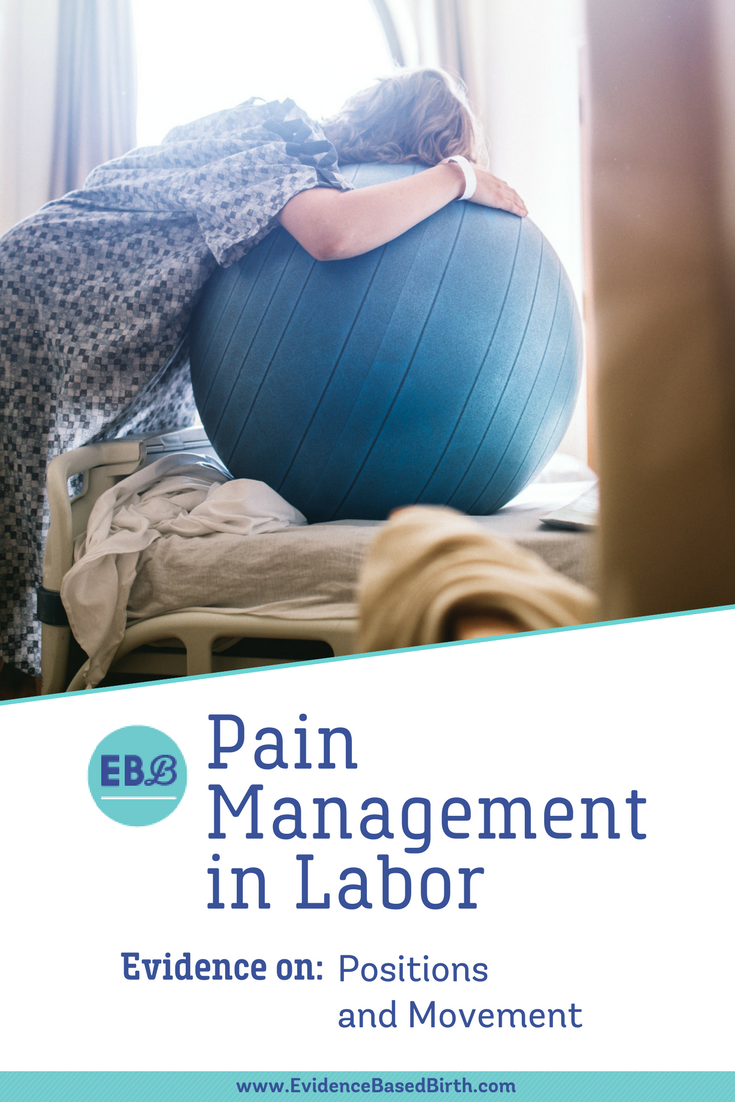 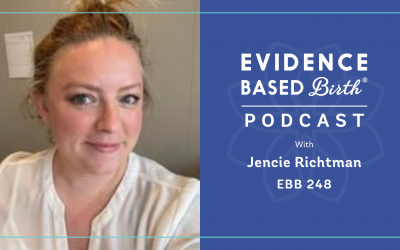 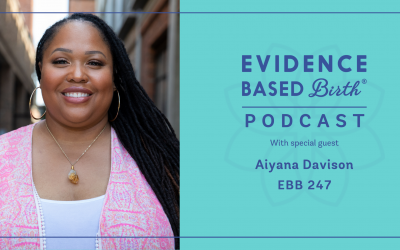 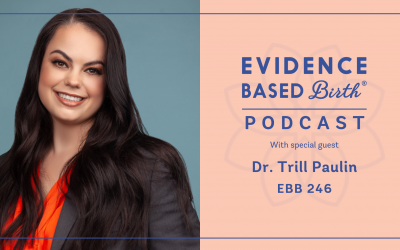