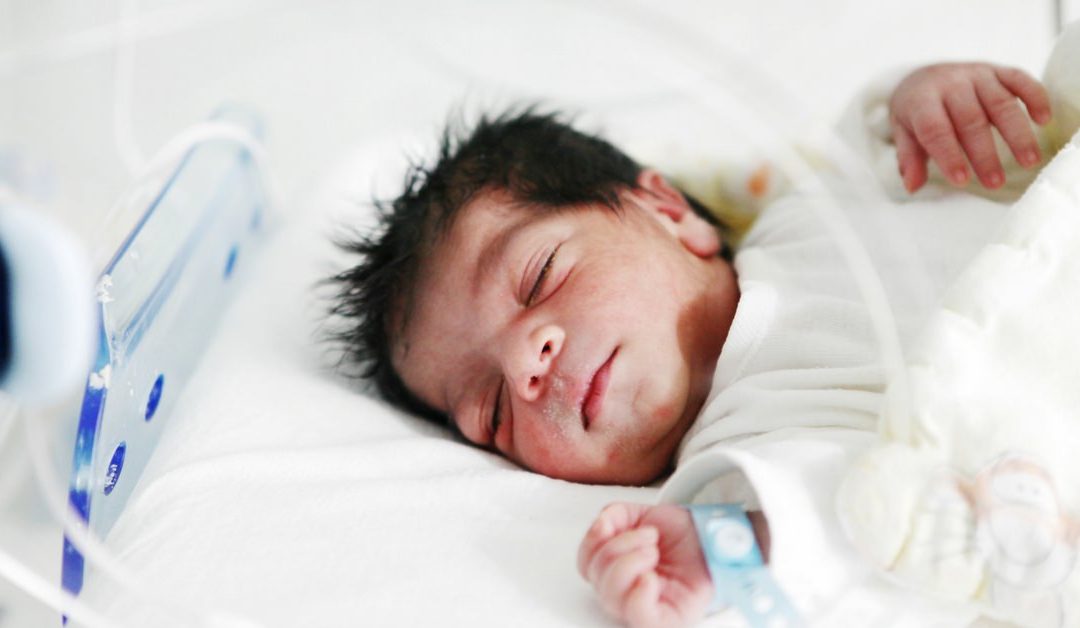 Welcome to the Evidence Based Birth® Q & A Video on the Vitamin K shot!

Today’s video is all about why most newborns around the world receive a Vitamin K shot. You can read our disclaimer and terms of use. 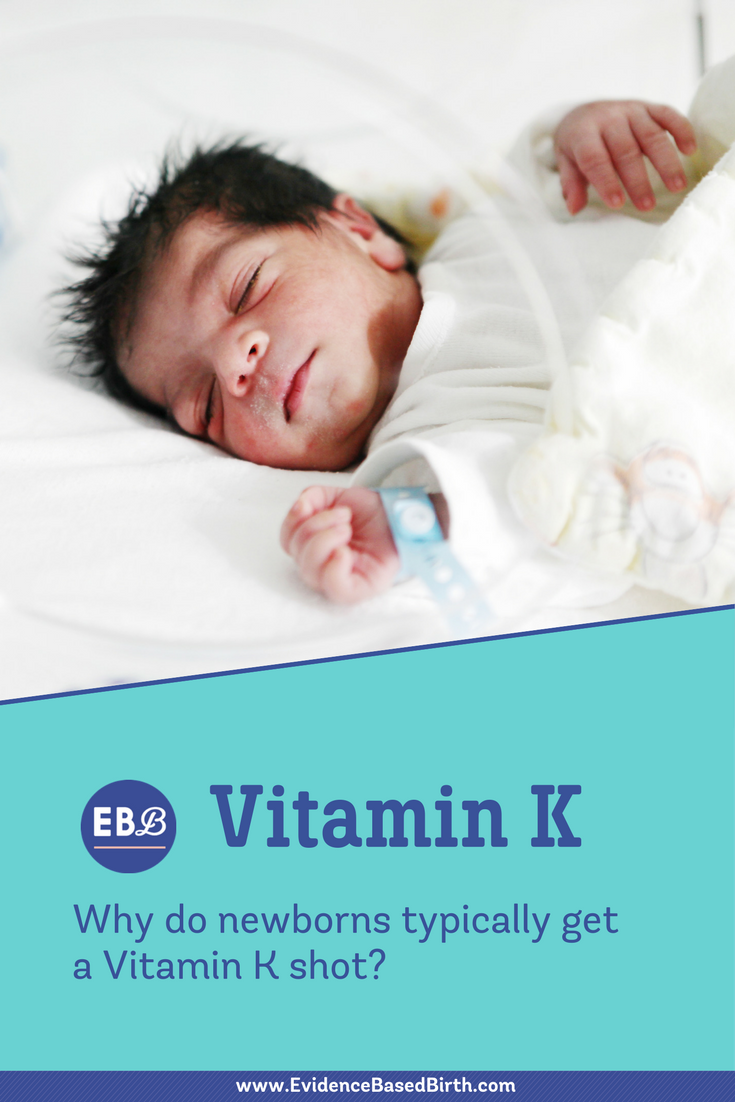 Hi, everyone. In today’s video, we’re going to talk about why newborns typically receive a Vitamin K shot after birth.

Hi, and welcome to the free video series all about Vitamin K and eye ointment for newborns. My name is Rebecca Dekker and I’m a nurse with my PhD. I founded the website, Evidence Based Birth®, in 2012 because I was so frustrated by the fact that it was nearly impossible for parents to find medical research about birth online. My mission is to get research evidence out of medical journals and into the hands of families.

In 2014, I spent about a year researching and working on an article for the public all about Vitamin K for newborns. This Vitamin K article was so popular it made the website crash multiple times and it took us a week to get the entire website back online. The article was covered by multiple journalists and it was recognized by the Centers for Disease Control where they posted a link to our article online.

So, this Vitamin K article was so controversial and it generated so much interest that I ended up creating a continuing education course for nurses, doulas, midwives and other professionals all about Vitamin K and eye ointment. I like to call them “Eyes and Thighs” because the eye ointment that goes in the eyes and the Vitamin K shot that is often given to a newborn in their thigh.

To celebrate the release of that course, I created these three free online videos for the public and I’ve updated them in 2017. You can also download a free printable handout about Vitamin K by clicking on the link below.

So, first of all, there is so much misinformation and confusion out there about the Vitamin K shot and this is one of the most common newborn procedures around the world. I hear questions like this all the time: “Is Vitamin K needed if your baby has a gentle, natural birth?” “If a parent declines the Vitamin K shot, is there another option like an oral regimen?” “What kind of toxins are in the shot and what are the side effects of the shot?”

Let me ask you: do you know the answers to these questions? Well, we will cover some of them in this free video series and the rest are covered in my online course about Vitamin K and eye ointment. You can also find more information at ebbirth.com/VitaminK. This video is the first of your three free lessons so let’s get started.

I wanted to start with a really controversial topic. Why do most babies receive Vitamin K at birth and who is at risk for bleeding if they don’t get the shot? Vitamin K has been given to most babies after birth since the 1960s. That’s because, in the 1940s and the 1950s, researchers discovered that by giving Vitamin K shortly after birth, they could prevent cases of severe bleeding and death due to bleeding in newborns.

However, many parents have asked me, “How do I know if my baby is at risk for bleeding?” “If I knew that my baby was going to have a brain bleed, then I would certainly choose the shot, but what if my baby is one of the many who won’t develop a brain bleed? Then I’d be giving them something that’s unnecessary and could cause side effects, right?”

Well, here’s the tricky part. Bleeding due to Vitamin K deficiency is rare, but the consequences are potentially catastrophic and it happens suddenly without warning. The bleeding in the brain that happens with Vitamin K deficiency is not related to, you know, the baby getting a knock on the head or something. It’s spontaneous bleeding that happens without warning and without reason. The only reason the baby starts bleeding is because they don’t have enough Vitamin K in order to keep their blood clotting appropriately.

The main risk factors for getting that kind of bleeding are either: one, not getting the Vitamin K shot after birth; and two, exclusive breastfeeding. “Well, wait,” you might be saying, “did you say breastfeeding? Isn’t breast milk nature’s perfect food?” Well, the truth is, although breast milk is amazing and has many, many beneficial qualities, it contains very limited amounts of Vitamin K no matter how much the mother is taking in in her diet and babies are born with very small amounts of Vitamin K in their bodies because it doesn’t pass through the placenta very well. It’s not stored in the cord blood or anything like that.

So babies are born with limited amounts of Vitamin K in their body and then they receive very tiny amounts from breast milk and they’re going to have low levels of Vitamin K until they reach about six months of age when they start eating solid food because Vitamin K primarily comes from plants. About 90% of our Vitamin K comes from plants in our diet.

During the six month period before babies eat solid foods, they’re at risk for this Vitamin K deficiency bleeding in their brains and in their intestinal tracts because we need Vitamin K in order to clot appropriately. Formula has tons of Vitamin K in it, so babies who are receiving supplemental formula or who are being fed primarily through formula are not typically at risk for the bleeding.

“So, that’s it?” you might ask. “Those are the two things that put a baby at risk: breastfeeding and not receiving the Vitamin K?” Yep, that’s it. Remember that this is a rare but catastrophic problem, so researchers have not been able to figure out why some babies bleed and some don’t. A great example is a set of twins that were born in Tennessee. The parents declined the Vitamin K at birth and a couple of months later, one of the twins developed a severe brain bleed. Both of the twins had severe Vitamin K deficiency, but only one of them developed a brain bleed.

It just goes to show you that we cannot tell which babies will bleed and which will not. It’s totally unpredictable. One other risk factor is undiagnosed gallbladder or liver problems, but these problems are pretty rare. They only happen in about 1 out of 60,000 babies and people almost always don’t know that their baby has a gallbladder problem until they start bleeding, so bleeding is typically the first sign of a gallbladder problem.

Again, the two risk factors for bleeding with a Vitamin K deficiency are breastfeeding and not receiving supplemental Vitamin K and, in very rare cases, undiagnosed liver or gallbladder problems. Interestingly enough, parents with a natural minded tendency who are more likely to decline interventions such as the Vitamin K shot, are often the ones who are most likely to breastfeed. If parents are breastfeeding and they decline the Vitamin K shot, their babies are at the highest risk, statistically speaking, for experiencing Vitamin K deficiency bleeding.

Now, a lot of people get stuck on the breast milk risk factor. They’d say things, “But breast milk is nature’s perfect food. How could nature design something so wrong? How could Mother Nature or God or evolution come up with something so faulty?” Well, I go into further detail about this in our online course for professionals, but basically we don’t know why infants receive so little Vitamin K from breast milk, but the fact is that they do receive very limited amounts. Most infants will be fine but a few will experience bleeding that could be severe enough to cause brain damage or death and we don’t know ahead of time which infants will experience that.

It’s definitely a controversial issue and I’m very sensitive to the fact there are a lot of myths, rumors, and misinformation floating around, but still, people get really stuck on some of these issues. Another thing that parents get stuck on is that they’re worried there might be preservatives or toxins in the shot. If you visit the Evidence Based Birth® Vitamin K article, you can see the list of ingredients that are used to make the Vitamin K safe for injection. If parents are really concerned, then they can ask for the preservative free version of the shot.

So, in summary, Vitamin K deficiency can cause severe bleeding in infants and infants are at higher risk if they’re exclusively breastfed and if they do not receive Vitamin K at birth. I’m looking forward to talking with you again in another video lesson where we’ll talk about the best oral Vitamin K regimen if a parent decides that they would prefer to give oral Vitamin K drops instead of the shot.

Make sure to leave a comment beneath this video giving me your thoughts. Also, once you’re done watching this video and leaving your comment, please make sure to get your free download. I made this awesome one page printable handout for you all about Vitamin K. It’s 100% free and I’m giving you permission to print and share with whoever you like, so please do yourself a favor and get that handout.

I’ll see you in our next video. Bye!