Evidence on Prenatal Checks at the End of Pregnancy 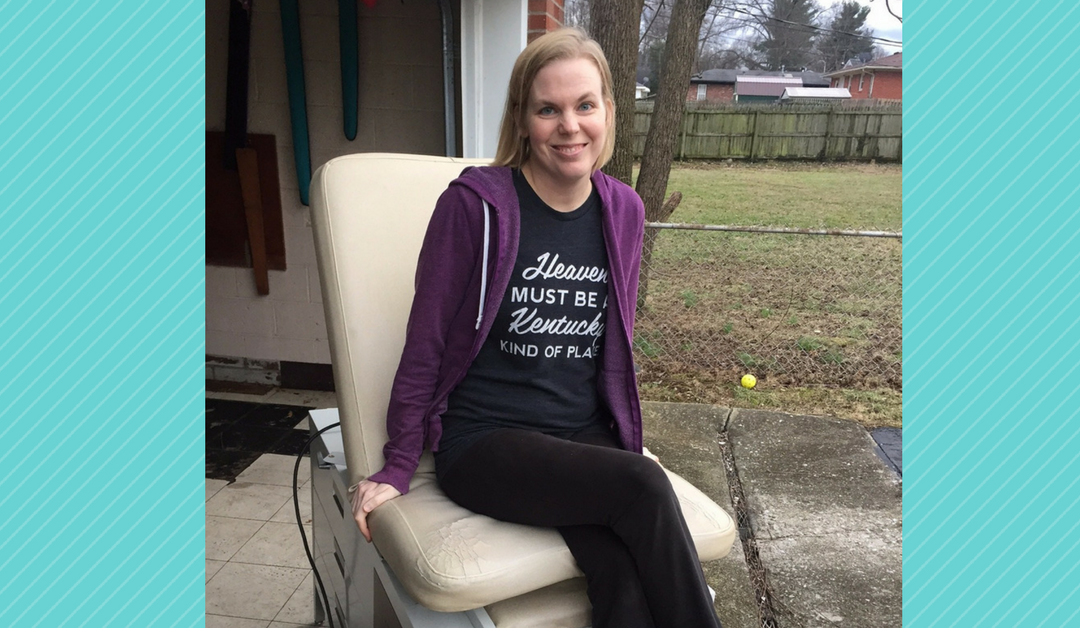 Welcome to the Evidence Based Birth® Q & A Video about Prenatal Vaginal Exams!

Today’s video is all about the evidence on weekly vaginal exams or cervical checks at the end of pregnancy. You can read our disclaimer and terms of use.

Enjoy the video, I hope you find it helpful! Stay tuned for our next Q & A! 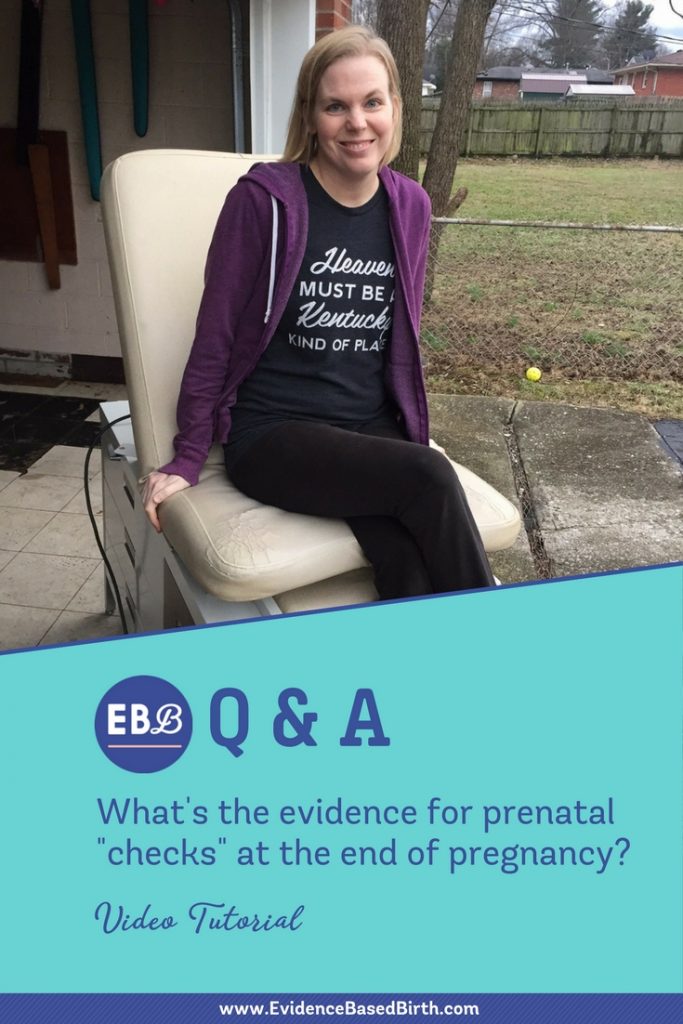 So the funny back story behind this photo… Cristen Pascucci (of Birth Monopoly) and myself (pictured) recently purchased an old exam table from a secondhand furniture store for a grand investment of $10! The table weighs 300 pounds, which explains the background (we couldn’t move it too far from its parking spot). We’re excited to use this table in future art and educational projects at Evidence Based Birth® and BirthMonopoly.com!

Hi everyone and welcome to today’s Q&A at Evidence Based Birth®. My name is Rebecca Dekker and I am the founder of Evidence Based Birth®. Today’s question comes from an expecting first time mom who wishes to remain anonymous. She wrote me, “What is the best evidence to give care providers when you want to decline cervical checks at the end of pregnancy? The ob-gyn practice currently checks weekly starting at 36 weeks, I know this doesn’t seem like a best policy but it would be great to have evidence to reference when I decline.”

This is a great question and it’s one I get all the time, not just from moms who are pregnant but also from doulas, child birth educators, midwives. Everybody wants to know what’s the evidence for those weekly cervical checks, also often called pelvic exams or vaginal exams, those terms are often used interchangeably. The thing about cervical checks towards the end of pregnancy is that they can be uncomfortably physically and emotionally, especially for women who may have a history of past sexual trauma or abuse.

Cervical exams can be used to detect dilation and effacement. Whether or not this is actually useful is doubtful because really all this does is satisfy your curiosity about where you are dilation-wise, but it doesn’t really mean anything clinically, unless for example you are going for an induction and you need to know if you’re already starting to dilate because that may be a favorable sign that an induction may go more smoothly.

We have two studies that were done quite a while ago to look at the effects of those weekly cervical checks. The first one was done in 1984, I know that might seem like a long time ago to some of you but this was actually the first study of its kind on cervical checks and there’s only two studies like this, so it’s important for us to look at these even though they’re older because they still give us good information.

These researchers wanted to know if the weekly cervical checks caused PROM. They enrolled 349 women and they randomly assigned them, like tossing a coin, to one of two groups. You either got in the no-exam group where you didn’t have any exams, any vaginal checks, until you got to 40 weeks or 41 weeks if the provider thought it was necessary. The other group, they had weekly cervical checks starting at 37 weeks.

The second study on this topic was published in 1992. Both of these trials were published in the journal Obstetrics & Gynecology, which is referred to as The Green Journal in the United States. This study took place at a Kaiser Permanente hospital in Denver, Colorado. The doctors there had been debating over whether or not weekly cervical checks towards the end of pregnancy influenced the rate of PROM, or your water breaking, before labor.

They decided to carry out a randomized trial. They enrolled 604 women who were pregnant at term and women either were randomly assigned to a group where they got weekly prenatal vaginal exams, starting at 37 weeks, or only receiving them if needed, for example if they’re about to undergo a labor induction. On average women in the vaginal exam group had about three vaginal exams before they went into labor, and women in the other group had about 0.6 exams on average.

They looked at a whole host of outcomes, not just PROM but on all kinds of maternal outcomes such as cesarean rates, induction rates, whether or not women were more likely to have an unplanned home birth. They also looked at all of the different newborn outcomes related to the newborn’s health. They found that there was no effect of the vaginal exams on PROM or any other maternal or newborn outcomes. Women were not more likely to have an unexpected surprise home birth if they did not have the vaginal exams.

Basically they summarized the study as saying that there was no harm and there was no benefit to weekly prenatal vaginal exams towards the end of pregnancy. Why is it that the two sets of researchers found different results? One set of researchers found that the prenatal vaginal exams led to a higher likelihood of PROM, a threefold higher risk. The other researchers found no harm or no benefit to the weekly vaginal exams. It’s possible that in the first study doctors might have been doing membrane stripping while they were doing the exam, and that’s something we can talk about in a whole different video but it basically involves doing an induction procedure, while you’re up there doing the vaginal exam they use their finger to sweep or strip the membranes from the cervix, and that can increase the risk of your water breaking before labor.

I think in summary the evidence really shows that there is no benefit to doing the weekly exams. It may satisfy your curiosity or your doctor or midwife’s curiosity, but it doesn’t really have an effect on your health either way. You are asking me what’s the evidence, what references can I use when I go to talk with my doctor, and I would say when it comes to a situation like this you don’t have to give your reason why. If you don’t want the vaginal exams, either because they make you uncomfortable or you just simply don’t want them or you think they’re unnecessary for whatever reason, your reason is your own and you don’t have to explain it to anybody.

You could just say, “No, thank you.” One way to avoid unnecessary vaginal exams towards the end of pregnancy is to simply keep your clothes on from the waist down during your appointment. When they come in to give you the gown, the paper gown to change into and they leave, when the doctor comes in you can keep your pants on. They can’t do a vaginal exam without your consent. It’s your body, it’s your vagina. You don’t have to give a reason why you don’t want somebody to put their hands up there, you can just say, “No, thank you,” and that’s it.

If they ask for information you can talk about it with him, but you don’t have to either. You could just say, “No, I just don’t feel like it,” or, “No thanks, I really don’t want that today.” That’s something to think about, it’s your body, you get the right to choose. When push comes to shove they have to respect your decision because they can’t forcibly make you undergo a vaginal exam.

Anyways, I hope this was helpful. I’ll see you next time for our next Q&A at Evidence Based Birth®. Bye.