Acupuncture or Acupressure for Pain Relief during Labor

Today’s video is all about using acupuncture and acupressure for pain relief during labor. As a reminder, here is our disclaimer and terms of use.

In today’s video, we’re going to talk about using acupuncture and acupressure for pain relief during labor.

Hi, everyone. My name’s Rebecca Dekker, and I’m a nurse with my PhD and the founder of Evidence Based Birth. I’ve been asked to create a video all about using acupuncture and acupressure for pain relief during labor.

Acupuncture has been used for at least 2,000 years in Asia, including China, Korea, and Japan. It is a major part of Traditional Chinese Medicine (TCM), which believes that good health is maintained by a balance of energy in the body. In TCM, acupuncture is a complex intervention, which often includes the provision of needling, a close patient/provider relationship, lifestyle advice, massage, and the use of herbs.

With acupuncture, very fine needles are inserted into different parts of the body and manipulated to correct energy imbalance. In electro-acupuncture, needles are connected to wires that deliver low or high frequencies of electrical currents.

Acupressure is based on the same theory as acupuncture, but instead of using needles, acupressure is delivered in a noninvasive way using fingers, thumbs, knuckles or other tools to put firm pressure on different areas of the body. Sometimes, only a few areas need that firm pressure in order to induce a sense of relaxation or pain relief. Unlike acupuncture, which must be delivered by a licensed provider, acupressure could be used by anyone, such as a midwife in an out-of-hospital birth setting.

How do acupuncture and acupressure work to relieve pain?

Acupuncture and acupressure are considered part of complementary medicine (CM). Studies have shown that the use of CM has risen worldwide with about half of all women of reproductive age using CM techniques.

What’s the evidence on using acupuncture and acupressure for pain relief during labor?

The researchers looked at several outcomes and combined data from the studies when possible. Even though 13 total studies were included in the review, only a small number of trials reported on each outcome.

Acupressure was linked with less intense pain (three studies), shorter labors (two studies), and less anxiety (one study) compared to people who received fake or sham acupressure. They also found fewer Cesareans in one study that compared acupressure to placebo but they found no difference in Cesareans with another study that did not use a placebo.

The Cochrane authors concluded that “Acupuncture and acupressure may have a role with reducing pain, increasing satisfaction with pain management and reduced use of pharmacological management.” However, they cautioned that there is not enough high-quality evidence to make recommendations for practice.

There have been at least three more randomized controlled trials that have come out since the 2011 Cochrane Review.

In another study published in 2015, researchers compared electro-acupuncture to IV opioids, epidurals, and no treatment. You could be randomly assigned to one of those four groups. The people assigned to epidurals had the lowest levels of pain, but the longest second stage labors. The epidural group also had side effects, such as maternal itching, difficulty urinating, and newborn breathing problems. The IV opioids group had side effects, such as maternal nausea and vomiting and newborn breathing problems. The researchers concluded that electro-acupuncture relieves pain better than no treatment and has fewer side effects than medication.

In another recent randomized controlled trial, mothers were assigned to either receive manual and electro-acupuncture, just manual acupuncture, or standard care. Everyone was free to use additional pain relief as they desired. They found that the people in the combined manual and electro-acupuncture groups were significantly less likely to use an epidural than the people who were in the standard care group.

There have also been four recent randomized, controlled trials on using acupressure for pain relief during labor. All four studies found that people randomly assigned to receive acupressure during labor experienced lower pain scores. The studies that looked at the length of labor also found shorter labors.

In conclusion, there is a need for more high-quality research on acupuncture and acupressure for pain relief during labor. At this time, the evidence on acupuncture or acupressure for pain relief during labor is limited, but the findings suggest the practices may be helpful. Placebo-controlled trials have found several potential benefits including higher maternal satisfaction and less use of pain medication with acupuncture, and lower pain intensity and less anxiety with acupressure. Both acupuncture and acupressure were shown to be helpful for decreasing the length of labor. All seven of the randomized controlled trials that have come out in the last few years have found at least one benefit from acupressure or acupuncture.

The main downside to acupuncture and acupressure for pain relief during labor is that it’s not as effective a method for pain relief as an epidural. In one study, about half of the people assigned to acupuncture still asked for an epidural. This means that in that group, about half of the women did not find it satisfactory enough to just use acupuncture. However, the evidence shows that acupuncture or acupressure may be good options for people who want to avoid pain medications or who are unable to receive pain medications during labor.

I hope you found this video helpful. Thanks and bye!

To learn more and subscribe to our newsletters for useful information, please visit EvidenceBasedBirth.com. 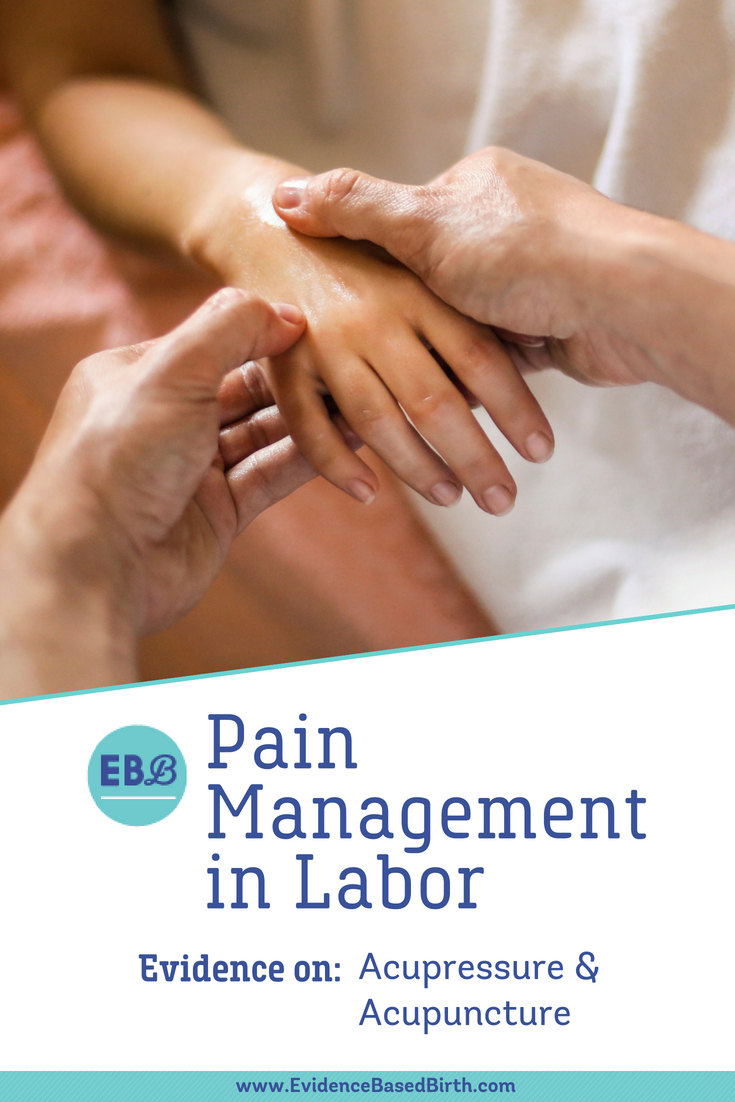 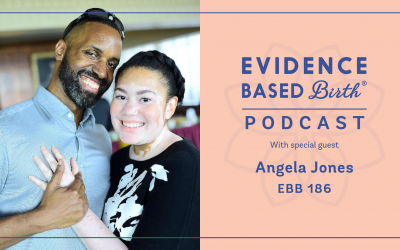 Don't miss an episode! Subscribe to our podcast:  iTunes  |  Stitcher  On today's podcast, we're going to talk with EBB Childbirth Class parent, Angela Jones, about having an uncomplicated pregnancy and birth when labeled as high risk. Angela is a macro-level social... 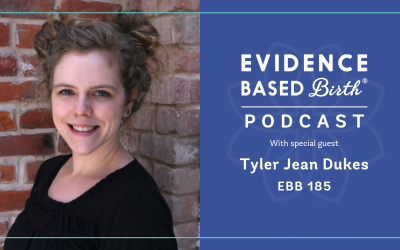 Don't miss an episode! Subscribe to our podcast:  iTunes  |  Stitcher  On today’s podcast, we will be talking with Tyler Jean Dukes, my doctoral fellow intern.  Tyler (she/her) is a doctoral candidate and graduate instructor at Texas Christian University. Over this... 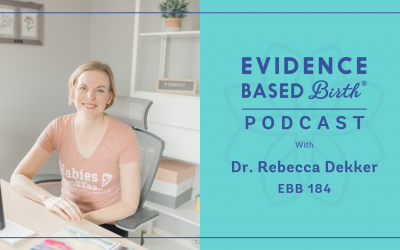 EBB 184 – How Research Evidence is Carried Out with EBB Founder Dr. Rebecca Dekker

Don't miss an episode! Subscribe to our podcast:  iTunes  |  Stitcher  On today's podcast, we talk about how to evaluate clinical research and how it is actually carried out. We are currently in the midst of a free 30-day trial of the EBB Pro Membership, and this...