So you’ve seen the Evidence Based Birth® t-shirt and you’re wondering… what is the evidence for those “Top Five Myths about birth– Debunked!!” on the back of the tee?

First of all… a little bit of a back story– in early 2014, I asked my audience on Facebook what they thought were the “top myths” surrounding childbirth. Based on their replies, I summarized the myths– and debunked them– on the back of an awesome t-shirt! 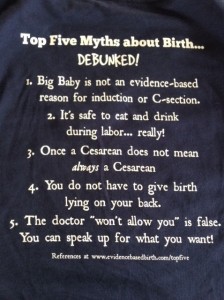 he first Evidence Based Birth® tee was available as a limited-time release in early July 2014. The tee was purchased by nearly 350 supporters, and together we raised $3,000 for the non-profit ImprovingBirth.org!

Unfortunately, if you want a t-shirt, they are not available right now! But I hope to launch another t-shirt line in November, just in time for the holidays. If you want to be the first to find out when the next tee is available, keep reading to the end of the article to find out more…

To read more about how you can start using the resources on this website, start here.

Now here are the references for the five “Debunked” myths!

1. Big Baby is not an evidence-based reason for induction or C-section.

Did you know that 1 in 3 women in the U.S. is told that her baby is “too big” at the end of pregnancy? (Declercq, Sakala et al. 2013). But in reality, only 1 in 10 babies is born big (U.S. Vital Statistics). In fact, research has repeatedly shown that both ultrasound and care providers are notoriously inaccurate when it comes to their ability to predict a big baby (Chauhan et al. 2005). If an ultrasound or caregiver guesses that your baby will weigh 8 lbs 10 oz or bigger, they will be wrong half the time! (So you might as well flip a coin to figure out if they’re going to be right!)

Furthermore, research has shown that induction for big baby does not improve the health of mother or baby (Irion and Boulvain 2000), and may increase the risk of C-section (Sanchez-Ramos et al. 2002). Also, in a landmark study, researchers calculated that it would also take 2,345 unnecessary C-sections for suspected big babies to prevent one case of permanent injury from shoulder dystocia (Rouse et al. 1996).

To read more about evidence on big babies, read the Evidence Based Birth article on “Induction or C-section for Big Babies.”

Or, if you prefer to learn by watching videos, you can take the Evidence Based Birth online course on “Evidence-based Care for Suspected Big Babies.”

2. It’s safe to eat and drink during labor… really!

The majority of women in the U.S. are restricted from eating and drinking during labor (Declercq, Sakala et al. 2013). Why? Because of the (liability-based) fear that if a woman needs emergency surgery, she may aspirate (food going down the wrong pipe) the contents of her stomach during the surgery.

But what does the evidence say? In one study, authors examined 4097 maternal deaths that occurred in the U.S. from 1979 to 1990. The risk of aspiration during cesarean childbirth was 0.667 per million women, or approximately 7 events in 10 million births (Hawkins, Koonin et al. 1997). The probability of this occurring is less likely than being struck by lightning!

In another study, researchers looked at 11,814 women who were given the freedom to eat and drink during labor, with some women requiring emergency C-sections. There were zero cases of any kind of harm reported from aspiration pneumonia, even though 22% of women had eaten solid food (Rooks, Weatherby et al. 1989).

Now if a woman doesn’t WANT to eat during labor, that’s totally fine! In fact, researchers have found that many women choose to stop eating the closer they get to birth. But it isn’t up to the health care provider to decide whether or not a healthy mother should eat during labor. Evidence shows that if a mother wants to eat… she should be able to eat! If she doesn’t want to eat, that’s fine, too!

The bottom line is, evidence does not support starving women during labor.

Hospital restrictions on food and drink during labor– although common– are NOT evidence-based.

3. Once a Cesarean does not mean always a Cesarean.

“Once a Cesarean, always a Cesarean,” is a common catch-phrase that has been around almost as long as the Cesarean surgery has! I have seen this phrase in research papers published as early as 1870. But things have changed a lot since the late 1800’s. So what’s the evidence on post-Cesarean options? Should women who have C-sections have all of the rest of their babies by C-section?

Evidence shows that whether a mother has a repeat Cesarean OR a vaginal birth after Cesarean (VBAC) is a preference-sensitive decision. This means there are potential risks and potential benefits to both options. And only the mother– the one whose body and whose baby it is– should be the one to make that decision (NIH, 2010).

Some people say that a VBAC isn’t safe. But the National Institutes of Health has stated that VBAC is a safe and reasonable option for most women, and that most women (74%) who attempt a VBAC will have a vaginal birth (NIH, 2010).

Why is this? First, 39% of women who desire a VBAC cannot find a supportive care provider or hospital (Declercq, Sakala et al. 2013), limiting their options to mandatory surgery. Second, care providers are– overwhelmingly– steering women towards repeat Cesareans.

Those statistics stand in stark contrast to the conversations women had with care providers about VBAC. When discussing a VBAC, only 37% of care providers spent some or a lot of time talking about the benefits of a VBAC, and if the care provider had an opinion, they only recommended a VBAC 12% of the time (Declercq, Sakala et al. 2013).

4. You do not have to give birth lying on your back.

Almost all women in the U.S. give birth either lying on their backs (68%) or in a semi-sitting/lying position with the head of the bed raised up (23%). A very small minority of women give birth in alternative positions such as side lying (3%), squatting or sitting (4%), or hands-knees position (1%) (Declercq, Sakala et al. 2013).

It is thought that most women are encouraged to push in a lying or semi-sitting positions because it is more convenient for the care provider (Gupta et al. 2012).

But is this evidence-based? Does evidence support routine use of the back-lying pushing position?

Evidence shows that for women who do not have epidurals, pushing in an upright position is associated with a decrease in the harmful use of episiotomies (a surgical cut in the vagina with scissors), a decrease in vacuum and forceps use, a decrease in problems with the fetal heart rate, and a possible increase in the risk of having blood loss more than 500 mL (Gupta et al. 2012). Women with “lighter” epidurals who push in upright positions may experience a shortened labor and pushing phase (Karraz et al. 2003; Golara et al. 2002).

The take home message is that women should  push in any position they find comfortable– it is not necessary to be continuously upright or continuously lying down during the pushing phase.

5. The doctor (or midwife) “won’t allow you” is false. You can speak up for what you want!

Have you heard these phrases before?

“The doctor will (or will not) allow you to…”

Are these words true? Do pregnant and birthing women give up their rights to informed consent and informed refusal when they step into the labor and delivery unit?

The answer is actually no– it’s false. The legal authority in the birthing room is the birthing woman. Women do not give up their rights to informed consent simply because they are giving birth. To read more about what informed consent is and isn’t, read this article by attorney Hermine Hayes-Klein, director of Human Rights in Childbirth.

Pregnant women in the U.S.– like all U.S. citizens– have the right to make decisions about their bodies and their babies. In other words, pregnant people are people, too.

The rights of birthing women are based in their constitutional rights to privacy and autonomy. And the right of a birthing woman to be the decision-maker about her birth and her baby has even been affirmed by the Ethics Committee of the American College of Gynecologists and Obstetricians (ACOG Committee on Ethics Committee Opinion No. 390 Ethical Decision Making in Obstetrics and Gynecology; Dec 2007, reaffirmed 2013).

So next time you hear this language– “I’m not allowed” or “You’re not allowed”– speak up! Use your voice to share that this kind of language is not only paternalistic, it’s just not accurate!

As Cristen Pascucci, founder of Birth Monopoly and Vice-President of ImprovingBirth.org says in a well-written article about the word allowed:

“It’s time to change our language to reflect the legal and ethical reality that it is the patient who chooses to allow the provider to do something– not the other way around.”

Okay, so now tell again me how can I get my t-shirt?

The Evidence Based Birth® t-shirt was a limited-time opportunity… and unfortunately, that time has passed! If you didn’t hear about it on the EBB Facebook page or newsletter, I’m so sorry! Nearly 350 people bought t-shirts during a two-week period in July 2014, with $3,000 in proceeds being donated directly to the non-profit ImprovingBirth.org!

Want to find out how you can get yours the next time one comes out? Keep reading… I promise I’ll tell you very soon!

But first, click on the Facebook comments below to see all of the awesome selfies EBB readers took when their new t-shirts arrived in the mail! Look at all those happy faces!

The next Evidence Based Birth® t-shirt will be offered in November 2014, just in time for the holiday season! If you want to be notified when the next tee is available, sign up for the monthly newsletter (below) and you will be the first to find out!

You really can’t depend on Facebook anymore to find out about these things. Which is why I strongly recommend you sign up for the newsletter if you want to be in the know!

For a LIMITED TIME: claim a free trial of our Professional Membership!Claim Offer