Rebozo during Labor for Pain Relief

Today’s video is all about using a rebozo during labor for pain relief. As a reminder, here is our disclaimer and terms of use. | Photo Credit: Birth Becomes Her

Hi, everyone. In this video, we’re going to talk about using a rebozo during labor for pain relief.

Hi, my name is Rebecca Dekker and I’m a nurse with my Ph.D. and the founder of EvidenceBasedBirth.com. In today’s video, we’re going to continue our pain management series by talking about using a rebozo during labor for pain relief. The rebozo technique is a non-drug, traditional way of helping manage pain during labor. It originated out of Southern and Central Mexico and it’s easily available and non-invasive.

What is a rebozo?

Mexican birth culture has a long tradition of using the rebozo before, during and after birth. There are regional differences in the color, texture and pattern of the rebozo but it’s a beautiful, long, woven piece of fabric that can also be used for caring infants after the birth.

Use of the rebozo has recently become more common in other parts of the world. For example, researchers in Denmark looked to see how frequently the rebozo is used during birth there. They found that before the year 2014, rebozos were only used in about 2% of planned vaginal births; however, today rebozos are used with about 9% of Danish women.

How is the rebozo used during labor?

Rebozo can be used in many different ways during labor but one of the most common is to use it on the birthing person’s hips, using controlled motions to help move the hips or sway them from side to side a little bit. These movements have been described as pelvic massage, rocking or jiggling. A care provider or support person typically uses the rebozo while the birthing person is on hands-and-knees, lying down or standing.

A lot of people think that the rebozo is especially helpful for correcting poor fetal positioning, so if the baby is in what we call, “Posterior position.” which may make labor more painful, longer or more difficult, a lot of care providers and doulas are well versed in using the rebozo to help encourage the baby to shift into a better position for birth. However, rebozos are not used to manually turn the fetus into a better position. Rather, it’s thought that the rebozo helps relax the muscles around the pelvis, which helps the baby get into a more optimal position for labor and birth.

How might the use of a rebozo during labor work to relieve pain?

Researchers aren’t really sure how the rebozo might work at this point. It really hasn’t been studied well enough. Part of it could be that the rebozo creates a positive psychological effect from the feelings of teamwork and labor support that the birthing person gets from the support team as they’re using the rebozo with her.

Helping a baby get into a better position could also relieve pain associated with longer labors and fetal malpositioning. The rebozo could also act through the gate control method of relieving pain. This is when non-painful or pleasant stimulations help block the more painful stimulations that are coming from the contractions.

What’s the evidence on using the rebozo for pain relief during labor?

Unfortunately, there are no scientific studies on the rebozo technique; however, that does not mean that it’s not effective. Its current use is based on midwives, individual experiences and individual narratives from women who’ve used it over many, many years in Mexico. Rebozo is a traditional practice, more than an evidence-based practice.

The World Health Organization has stated that the lack of studies on traditional practices should not become an obstacle in their application or development. There have been two papers published in peer-reviewed journals about using the rebozo during labor.

Iversen et al. published a qualitative study in 2017 in Denmark. Qualitative means that they interviewed people and looked for narratives about their experiences.

In this study, participants could be included if they used the rebozo during labor. They were recruited shortly after the birth and then later on, the Danish researchers interviewed them by phone. There were 17 participants in the study and the lengths of the interviews ranged from 28 to 55 minutes. Some of the women had epidurals but most did not. Some were having spontaneous labors and some had induced labors.

Most of the participants said that they used the rebozo because their baby was not in an optimal position. They were using it for fetal malpositioning. Only one person out of the 17 used the rebozo primarily for pain relief. They described using the rebozo in the standing, hands-and-knees and lying down positions. Through the interviews, they found that the women’s experiences with the rebozo were overall very positive.

2015 Review by Cohen and Thomas

In addition to that study which we just talked about, there was also a review published in 2015 by Cohen and Thomas. In this review that was published in the Journal of Midwifery & Women’s Health, the researchers described three different techniques that could be used with the rebozo to correct fetal malpositioning.

They talked about the lying-on-the-back position. In this position, the participant lies on the rebozo so that it covers the lower back and buttocks. And then there are three maneuvers that can be done with one or two people assisting: quick tug, rocking,  or knee bounce (which is when you have bent knees and feet resting on the bed). They have photographs of these maneuvers in their journal article.

They also talk about using the hands-and-knees position with rebozo for fetal malpositioning. In this hands and knees position, the rebozo goes under the lower abdomen, including covering the hip bones to form a sling. Then the support person stands behind, pulling up and back with both hands. The goal is to create a gentle, rapid, rhythmic motion in the mother’s pelvis. They use this technique in between contractions, so not during a contraction, and then during the contraction they apply firm counterpressure on the person’s sacrum.

The third technique that they taught about in this article was called child’s pose. With this position, the mother lowers down from the hands and knees so that her butt is raised up in the air. And the rebozo goes over the woman’s behind and then by grasping the rebozo on either side of the hips from behind the mother, they rock the hips from side to side or forward and back. That would be done in between contractions- during contractions, again, they would stop and perform counterpressure.

Cultural Appropriation and the Rebozo

This, (shown in the video), is a real rebozo and so I can call it as such, but you would not call a sheet or some other kind of babywearing sling a rebozo. Traditional midwives in Mexico have also expressed the wish that the rebozo should not be taken away from its cultural context. They wish that the oral tradition of honoring the teacher who transmitted the rebozo wisdom would be expressed before using the rebozo. This could be done in any manner that the person feels appropriate.

In addition, traditionally, the person using a rebozo technique on someone else first asks permission to enter that person’s space.

Where Can I Purchase a Rebozo?

It’s also important to purchase authentic, traditional Mexican rebozos. We’ll link below to several different websites where you can purchase your rebozo. Now, the authors of the Cohen and Thomas (2015) review say that the traditional rebozo is ideal to use because of its strength and grip of the fabric. However, if you work in a hospital where you were going to be using a rebozo with a high volume of patients, it cannot be heavily cleaned in a commercial laundering facility over and over, without sustaining damaging. So, birth facilities that would like to have this option available to a large number of women could use a sheet that could be laundered to that hospital’s standards. However, that is not a rebozo and it should not be referred to as one.

If you’re an expecting parent and you would like to use a rebozo during labor, you can either purchase one yourself, or often you can hire a doula or midwife who already owns one or more rebozos that they use with their clients.

Some people have asked if there’s any reason why you could not use a rebozo, in other words, what are the contraindications?

Contraindications to Using a Rebozo During Labor

The authors of the 2015 review on rebozo said that “There are certain situations where you would probably not want to use a rebozo during labor. These are situations where there’s a concerning fetal heart rate, a breech baby where the membranes have already ruptured and there’s a risk of cord prolapse, a condition called placental abruption, abnormal vaginal bleeding, maternal discomfort, and other contraindications for a vaginal birth.”

In conclusion, the rebozo has a long history of traditional use and I would like to honor those midwives who passed down that knowledge to other women around the world today. It likely offers benefits to fetal positioning and increased comfort during labor. However, we do need randomized, controlled trials and other studies on its use. In the resources section, we will link to several resources- those papers we mentioned about the rebozo as well as other sources of information and several links where you could consider purchasing a rebozo.

That’s it for this video. I hope you found it helpful. If you like our videos please click subscribe and subscribe to our YouTube channel, as well as consider watching all of the many other videos we have in our pain management series for managing pain during labor. Thanks, everyone. Bye. 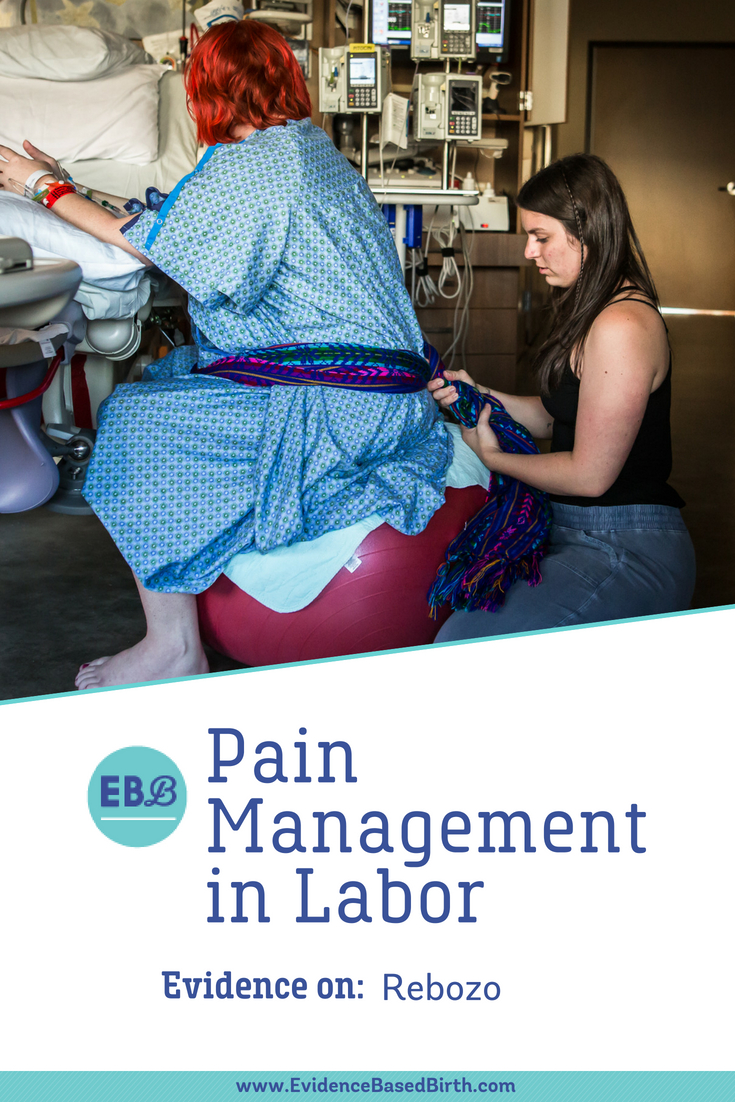 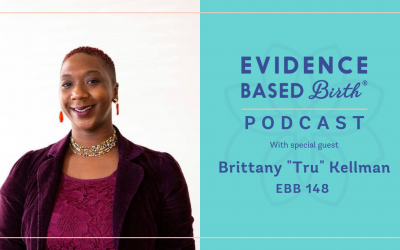 Don't miss an episode! Subscribe to our podcast:  iTunes  |  Stitcher **Trigger Warning: This podcast contains content on the topic of obstetric abuse and birth trauma.** In this episode, I interview Brittany “Tru” Kellman, the Founder and Executive Director of Jamaa... 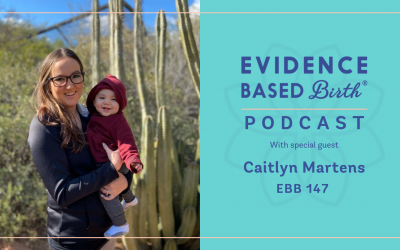 Don't miss an episode! Subscribe to our podcast:  iTunes  |  Stitcher In this episode, I interview an Evidence Based Birth® Childbirth Class parent, Caitlyn Martens from Mesa, Arizona. Her son - now just about a year old - arrived a month early. She took the EBB... 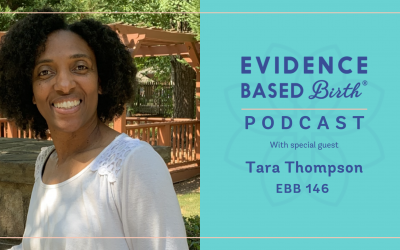 Don't miss an episode! Subscribe to our podcast:  iTunes  |  Stitcher In this episode, I interview Evidence Based Birth® Instructor Tara Thompson. Tara is a certified birth doula with CAPPA, a Lamaze certified childbirth educator, and a licensed massage therapist...