Massage for pain relief during labor

Today’s video is all about using massage for pain relief during labor. As a reminder, here is our disclaimer and terms of use. | Photo Credit: Beloved Bits

Hi, everyone. In today’s video, we’re going to talk about massage for pain relief during labor.

My name’s Rebecca Dekker, and I’m a nurse with my Ph.D. and the founder of Evidence Based Birth. This video is part of our pain management series, and I encourage you to watch the whole series on YouTube. Today, we’re going to be focusing on massage for pain relief during labor.

Massage involves manipulating the body’s soft tissues. It is used to help relax tense muscles and to help calm people.

Different massage techniques may benefit different people during labor. For example, some people may find intense massage over the lower back helpful. Others may find light effleurage, or soothing strokes, to be especially helpful.

How might massage work to relieve pain during labor?

Researchers think there are two different ways that massage could work. The first is through the Gate Control Theory. Gentle, or non-painful massage, can act on the Gate Control Method by flooding the body with pleasant sensations so that the brain does not perceive the painful sensations as much. In other words, it sort of blocks painful messages from getting to the brain because the brain is concentrating instead on all of the other sensations it’s feeling.

Intense, or painful deep massage acts on something called the Diffuse Noxious Inhibitory Control method of pain relief. The idea is that the stimulation from painful massage is so intense that it stimulates the brain to release its own natural pain-relieving hormones called endorphins. Your body is then flooded with endorphins that help you perceive less pain from contractions.

Researchers also think that massage might work by decreasing cortisol, or stress hormones and increasing levels of serotonin and dopamine in your brain.

The Listening to Mothers III Survey, published by Declercq et al., found that 22% of mothers who gave birth in US hospitals used massage during labor.

So, what’s the evidence on massage during labor?

In 2018, researchers combined randomized, controlled trials into a Cochrane Review. They included 14 randomized, controlled trials and 10 of these were combined into what we call a meta-analysis, where the statistics are all pooled together to make one large study. This one large study had a little over 1,000 participants. The studies were all very different in how frequent, how long,  and what types of massage were used.

Three of the studies involved a two or three-hour childbirth education class on massage that was attended by pregnant people and their partners. In some of the trials, massage was given by the partner, in others by therapists or nurses or researchers. The researchers found that massage during the first stage of labor was linked with slightly lower pain scores than usual care. They were not able to determine its effect during the second and third stages of labor, and four trials that looked at the use of pain medication found no difference in rates of pain medication used between the massage group and the usual care group.

A few trials looked at other outcomes such as anxiety or perceived control during labor. One study with 60 women found that the women who received massage had less anxiety during labor. And, another trial with 124 women found an increased sense of control over the labor and birth experience among women who received massage. Only two trials looked at maternal satisfaction and both of them found higher rates of satisfaction in the massage group.

There was another study that came out in the year 2017 that took place in Turkey, that was not included in the Cochrane Review. This was a small study with about 62 low-risk people who were giving birth without pain medication, and they were assigned to massage or usual care. Nurses in the study were trained on how to do a special type of massage that involved the upper, middle, and lower back and hips. The massage was coordinated with the birthing person’s breathing. Each woman in the massage group received this type of massage for 30 minutes at three different points during labor – towards the end of early labor, during active labor, and during the transition phase.

The results from these studies showing that massage results in lower pain levels and higher satisfaction during labor is not surprising, given the research on massage therapy in general for non-pregnancy and non-birth related conditions.

There was a Cochrane Review published in 2015, just looking at the effects of massage in general for low back pain. They found that massage was beneficial for lowering short-term pain in people with acute back pain, meaning, it was effective for people who had temporary back pain problems. Massage was also helpful in the short-term for people who were experiencing chronic lower back pain. Out of the 25 randomized trials, they did not find any serious side effects from massage. The most common side effect was having an increase in pain, which happened to anywhere from 1.5% to 25% of participants.

Massage in the Acute Care Setting

Researchers have also looked at the effects of massage therapy on people in hospital settings. There was an interesting study published by Adams et al. in 2010, where they looked at 53 people who were hospitalized in Arizona. They assessed pain scores before and after massage therapy. The massage was provided by a licensed massage therapist, and patients had anywhere from 15 to 45 minutes of massage. The average pain score before massage was a 5.2, and after the massage, the average pain score on a visual scale was 2.3. So, this is a significant decrease in pain.

The authors noted that in the hospital setting, health care professionals have a tendency to only touch patients when they’re doing assessments or procedures, which can be uncomfortable or painful. They quoted a researcher named White, who wrote, “Touch is often the most neglected or assaulted sense of the hospitalized patient.”

So, the evidence from the 2018 Cochrane Review on massage for pain relief during labor found that overall, massage seems to be beneficial for decreasing pain, decreasing anxiety, and increasing satisfaction with the birth. Unfortunately, the quality of evidence in that Cochrane Review was considered to be low or very low because it’s impossible to blind people to whether or not they’re receiving massage or no massage. In addition, most of the studies had a small number of participants. However, in light of the potential benefits of massage, and the fact that there doesn’t seem to be any evidence of harm for using massage, massage should be an available option for all people during labor for pain relief.

There are different types of massage that can be used during labor, such as lower back massage, smooth strokes, also called effleurage, counter pressure and hip squeezes. In my experience, I found that doulas are very skilled in massage techniques. So, if you’re a professional or a partner who plans to be supporting people through birth, I would highly recommend learning from doulas about how they massage their clients.

We also looked at the evidence on massage in general, not during labor, and found that overall it appears to be effective as well for lowering pain and helping people with relaxation.

I hope you enjoyed this video, and I would encourage you to hit Subscribe to subscribe to our YouTube channel, as well as check out our other pain management videos in our series. Thanks for watching, everyone. Bye. 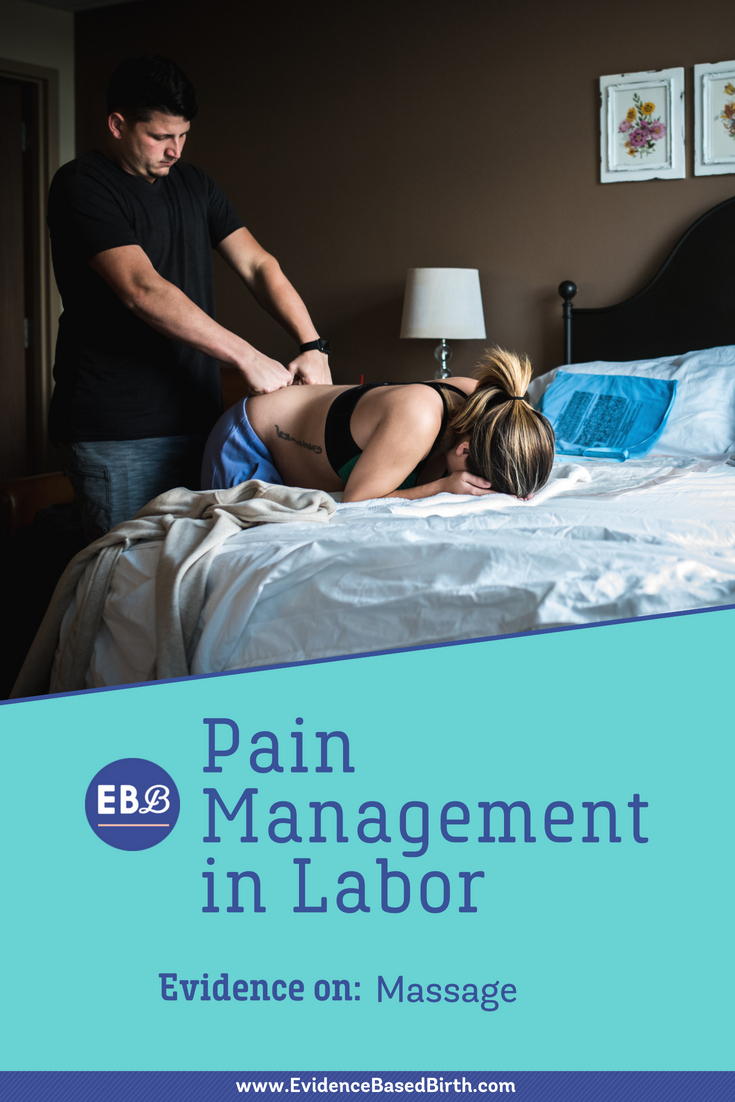 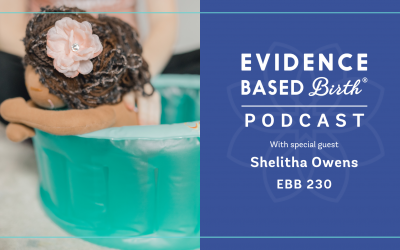 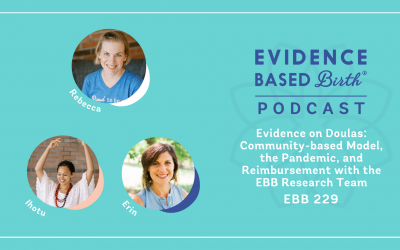 EBB 229 – Evidence on Doulas: Community-Based Models, the Pandemic and Reimbursement with the Research Team

Don't miss an episode! Subscribe to our podcast:  iTunes  |  Stitcher  In today's episode, hosted by the EBB Research Team, we are sharing the audio from a private livestream we did with our Pro Members at Evidence Based Birth. We talk about three major topics related... 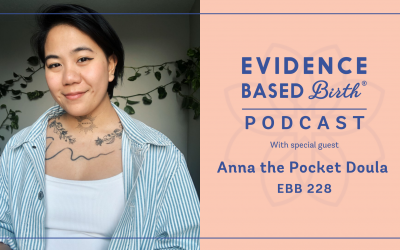 Don't miss an episode! Subscribe to our podcast:  iTunes  |  Stitcher  On today's podcast, we're going to talk with the founder of The Pocket Doula, Anna Balagtas, about uplifting queer, and trans-care.  Anna Balagtas (she/siya) is a queer, Pinay full circle birth...