Labor Day 2012: The State of Evidence-Based Maternity Care in the United States

What is evidence-based care?

According to the American Medical Association, evidence based care means 1) being aware of the evidence (research) that is the basis of practice, 2) understanding the quality of the evidence, and 3) knowing whether or not the evidence should be applied to an individual’s situation, which takes into consideration the patient’s  personal values.1

How do we know what the best evidence is for care during pregnancy and childbirth?

One of the best resources for information on research-based care is the Cochrane Library. The Cochrane Library is known for their rigorous systematic reviews of the evidence; free summaries of articles are availlable to the public. (To read more about why systematic reviews such as the ones done by the Cochrane Library are the highest level of evidence, click here). Other esteemed sources of evidence include the U.S. National Library of Medicine’s PubMed (a free-to-the-public search engine that catalogues all peer-reviewed health research), and the U.S. Centers for Disease Control and Prevention.

What is the difference between standard of care and evidence-based care?

**9/4/12 8 PM EST Shortly after this article was originally published, I was enlightened by a reader as to the legal definition of standard of care (see comments below), and this paragraph has replaced what was previously published. The reader and I worked via email to revise this section. I always appreciate reader feedback and as you can see, it sometimes leads to improvements, alterations, or deletions of my material.

Health care providers sometimes confuse the way they do things and cultural norms with the “standard of care.” Theoretically, providers should be able to defend, in court, a deviation from culture that is backed up by research evidence. We say theoretically, because first of all, care providers in court are not defending themselves to people who read research evidence, but to a jury of average Americans. Secondly, there is no standard legal precedence for how evidence-based guidelines are handled in court. Sometimes evidence-based guidelines are referred to, and sometimes they are deemed not applicable– it is handled on a case-by-case basis.

Adherence to “standard of care” allows care providers to continue to carry malpractice insurance and have hospital privileges. It would be ideal if standard of care was synonymous with evidence-based care, but the two concepts are subtly different: one is primarily a legal term and focuses on being reasonably prudent and preventing malpractice, and the other has to do with providing care that is based on best research. In the ideal word, these terms would mean the same thing, but unfortunately in our legal system, they do not.

What is routine care during childbirth in the United States, and how does it measure up to evidence-based care?

To compare routine care to evidence-based care, we can look at statistics from the 2007 Listening to Mothers Survey, the U.S. Healthy People 2020 initiative, the U.S. Centers for Disease Control, the Cochrane Library, and other sources retrieved from PubMed. Portions of this table, which I wrote, have been previously published at ImprovingBirth.org (Reprinted with permission).

What is the state of evidence-based maternity care in the U.S.?

Please take a look at this table to compare care that is typically provided in the U.S. to maternity care that is based on research evidence.

What about maternal satisfaction? What if a woman requests care (such as artificial acceleration of labor with Pitocin) that is not  supported by evidence?

This question came from one of my readers on Facebook, and this brief segment was added on 9/3/12 at 9 PM EST. Whenever I review the research evidence behind a particular practice, I examine whether researchers measured maternal satisfaction. Sometimes satisfaction is measured, and sometimes it is not. In my detailed evidence-based reviews, I do mention whether or not a particular intervention is associated with an improvement in maternal satisfaction. Maternal satisfaction an important factor to take into account– along with other risks and benefits– when a woman and care provider discuss a course of action (or inaction) together.

In conclusion, the vast majority of U.S. women are not receiving evidence-based care during childbirth. Although there are outlier hospitals, birthing centers, and care providers who do provide excellent, across-the-board evidence-based care, there is clearly an overall need for routine care to match up more closely with evidence-based practices during childbirth. Next year, in September 2013, I plan to use the upcoming results from the 2012 national “Listening to Mothers” Survey to see whether we have improved in any of these measures listed above. 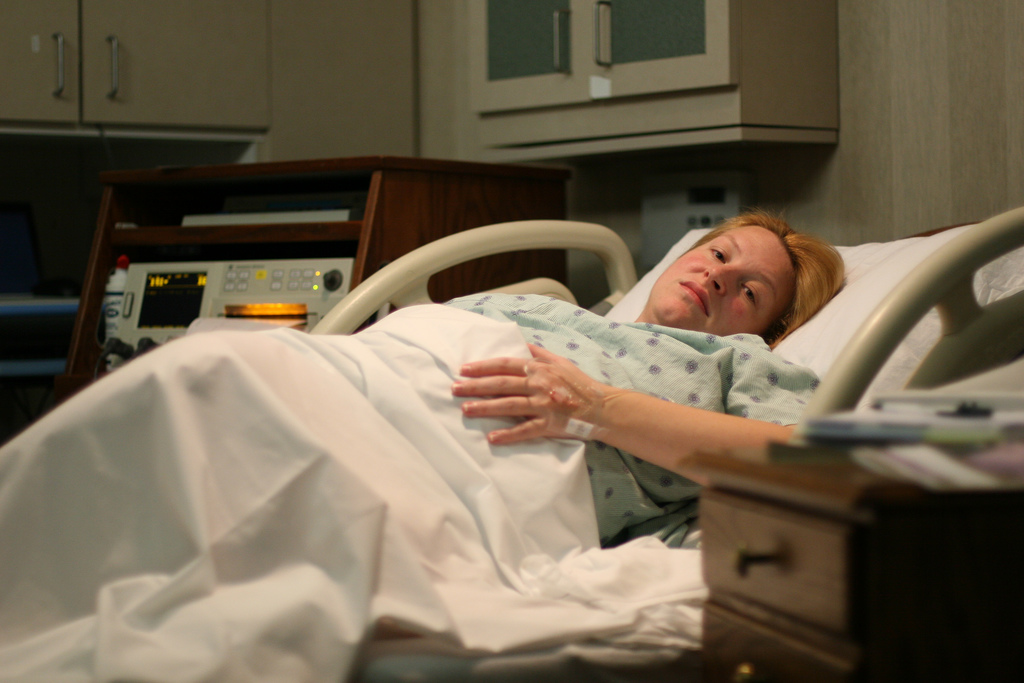 The vast majority of women in the U.S. do not receive childbirth care that lines up closely with evidence-based care. This image depicts a woman who is receiving Pitocin induction, IV fluids, continuous electronic fetal monitoring, nothing to eat or drink, and restriction to bed. Image source: Robenjoyce

13. Kavitha A, Chacko KP, Thomas E, Rathore S, Christoper S, Biswas B, Mathews JE. A randomized controlled trial to study the effect of iv hydration on the duration of labor in nulliparous women. Archives of gynecology and obstetrics. 2012;285:343-346

LIMITED TIME ONLY - 20% off Membership Sale!Become a Member Now