Bed Rest during Labor if your Water Breaks

For the flagship Evidence Based Birth article on induction for term PROM, click here.

This article was written by Rebecca Dekker, PhD, RN, APRN
Please read our Disclaimer and Terms of Use.

So what are the typical birth practices surrounding a woman who has term PROM?

I can give you my firsthand account. I was one of the 8% of women who initiates labor with term PROM. Being fairly uneducated about birth (despite being a registered nurse and taking the hospital birthing course), I followed my doctor’s instructions without question. I took a quick shower and arrived at the hospital at midnight, about one hour and fifteen minutes after my water broke. Contractions had started on the drive there, but they weren’t very strong yet.

So what happened? I was checked into triage, and I underwent a manual examination to determine cervical dilation and to verify that my waters had indeed broken. The nurses started an IV with IV fluids (not evidence-based), hooked me up to the continuous electronic fetal monitor (not evidence-based) and an OB resident offered me Pitocin to augment my labor. I declined the Pitocin.

I was transferred by wheelchair to a patient room. I got up to use the bathroom, and I will never forget this—the nurse told me, “That’s the last time you will be allowed to walk. After you get back in bed, you are on strict bed rest because your water has broken.” I was also told I was not allowed to eat or drink (not evidence-based). Another OB resident came to check on me, and again offered Pitocin augmentation. I declined. I spent the rest of the night awake, lying in bed, feeling my contractions come and go about every 3-5 minutes. I had to pee frequently because of the IV fluids, but I was not allowed to get out of bed to go to the bathroom. I started having difficulty using the bedpan, and I ended up requiring intermittent urinary catheterization to empty my bladder. 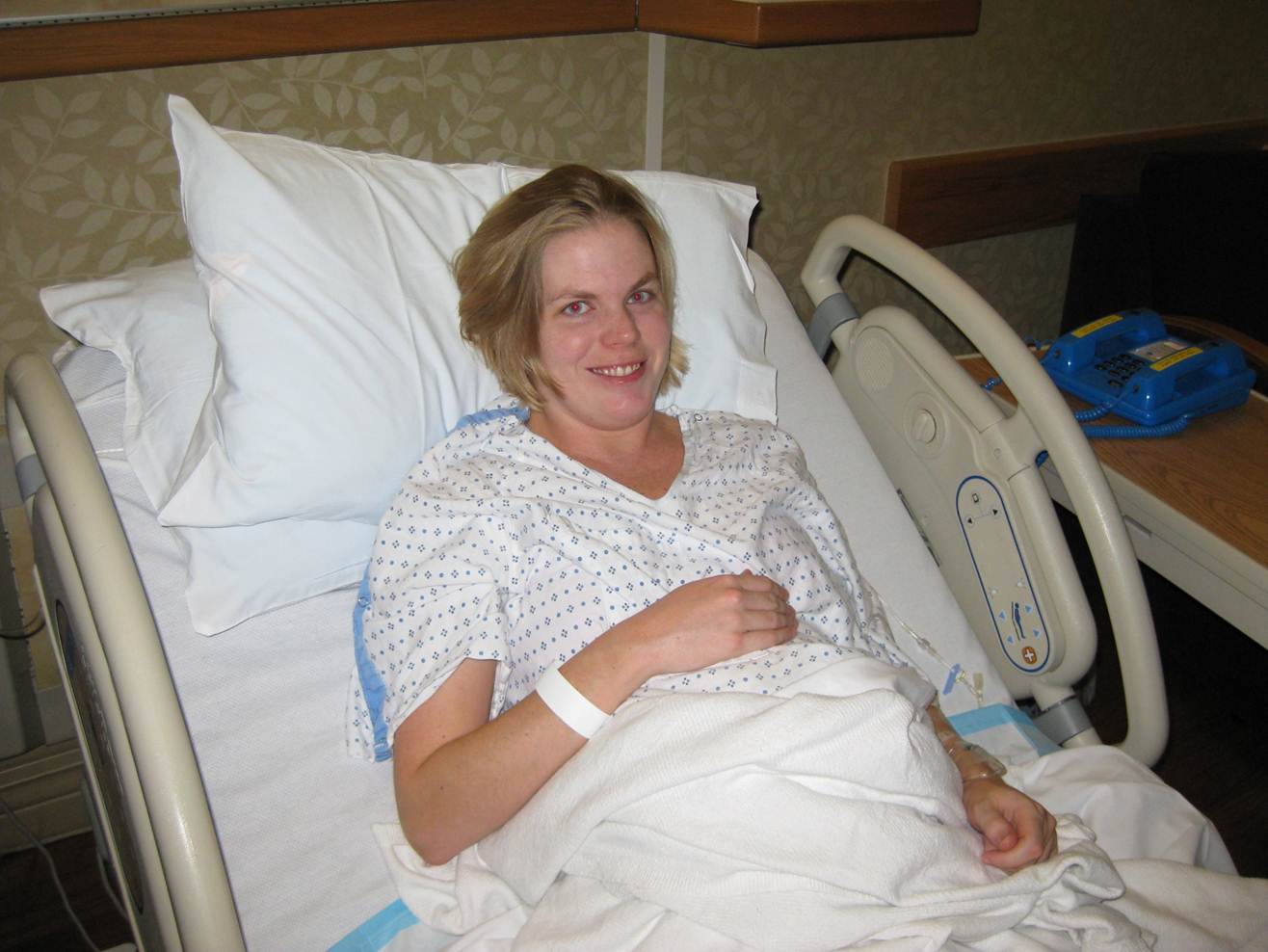 Here I was that night, following the nurse’s orders to stay in bed.

The next morning, a different OB resident checked my cervix again and said that I had not made any progress (I was still at 2 cm). They strongly recommended Pitocin augmentation. I knew that the hospital had a 24-hour time limit for giving birth once your membranes have ruptured, so I finally accepted. That simple act of accepting the recommendation to augment with Pitocin (an unnecessary intervention) initiated an entire cascade of interventions—Pitocin drip, epidural, fluid boluses, urinary catheterization, continuous pulse oximetry, and frequent blood pressure checks. At one point I realized that I was connected to 6 different tubes or wires. During the pushing phase, we found that my daughter’s head had not descended properly (it was tilted slightly). I pushed for 3 hours, and ended up with a vacuum-assisted vaginal delivery. My daughter was born 24 hours after my water had broken.

So what is the evidence for some of these typical birth practices? I have already covered IV fluids, Pitocin augmentation, continuous electronic fetal monitoring, and denying food and drink to a woman in labor—and we know that the evidence shows these are unnecessary interventions that have very few benefits (some have NO benefits) and a lot of risks.

But what about bed rest? What is the evidence for making a woman lay down after her water has broken? How about the cervical checks? (I probably had 4 or 5 over the course of my 24-hour labor). How much did those checks increase my risk of infection? And why were the OB residents so insistent that I augment my labor with Pitocin to make sure that I gave birth within 24 hours?

Today, I am going to talk about the evidence for bed rest after your membranes have ruptured. The other topics (cervical checks, time limits for giving birth, and Pitocin induction after term PROM) are covered in the PROM article here.

Hospitals sometimes have policies that require women with term PROM to stay lying down in bed because they fear the complication of a prolapsed umbilical cord. A prolapsed umbilical cord happens when the cord comes down before the baby’s head. This is considered an obstetrical emergency and is typically managed with getting on your knees and putting your chest on the floor, the care provider using their hand to push up against the presenting fetal part to take pressure off the cord, and an urgent C-section.

But my question is, “Is it necessary for a woman with term PROM (37 weeks gestation or later), or just any woman whose waters have broken, to stay in bed to avoid umbilical cord prolapse?”

There is absolutely no evidence that bed rest reduces the risk of cord prolapse in women with term PROM or in women whose water breaks during labor. Furthermore, term PROM is not even considered a known risk factor for cord prolapse.

In a study by Dilbaz et al. (2006), researchers examined 80 cases of umbilical cord prolapse and compared them to 800 randomly selected cases with no cord prolapse. All of the cord prolapse cases were managed with positioning and emergent C-section delivery. There was only 1 death out of 80 cord prolapses, and that particular infant was born at 26 weeks gestation and died of a brain hemorrhage (probably related to prematurity). Interestingly, there were 7 cases of cord prolapse that occurred outside of the hospital, which led to a slight delay in C-section delivery. Although those infants had lower Apgar scores after delivery, only one infant was admitted to the NICU—and all 7 survived and were discharged in good health.

In another study by Uygar et al. (2002), researchers compared 77 cases of umbilical cord prolapse to 231 non-prolapse cases. There were 3 deaths in the cord prolapse group, so the chance of an infant dying in the prolapse group was 3/77, or 4%. The 3 deaths occurred in infants whose cords were prolapsed either before coming to the hospital or during transit. One of those 3 deaths was in a 25-week gestational infant whose mom also had a placental abruption. The authors do not describe whether those infants received proper management of the prolapsed cord outside of the hospital, or the amount of delay in C-section.

In a much larger study conducted by Kahana et al (2004), researchers looked at 456 cases of umbilical cord prolapse that occurred in 121,227 births. There was an 8% mortality rate for the infants with cord prolapse, compared to 1% for the non-cord prolapse group. If those death rates seem high to you, you need to understand that this study included premature births which accounted for most of the deaths in both groups. So again, death can occur with cord prolapse, but most of the time it is due to prematurity, not the cord prolapse.

Well, the answer is maybe, but maybe not.

One recent study found that PROM was a risk factor for cord prolapse (Dilbaz, 2006), but other studies have not found the same results (Uygur, 2002; Kahana, 2004). In the largest study on cord prolapse (Kahana, 2004), researchers found that the risk factors for cord prolapse were extra high levels of amniotic fluid, a true knot of the umbilical cord, premature delivery, induction of labor, a history of having given birth more than 5 times, a lack of prenatal care, and having a male infant (Kahana et al. 2004).

So PROM is not considered a known risk factor for prolapsed cord. Furthermore, there are absolute no studies—zero—that test whether bed rest reduces the risk of cord prolapse in women with term PROM (past 37 weeks). There are no obstetrical textbooks that I could find that described bed rest as part of the management of term PROM, or even after your water breaks during the normal course of labor.

So, there were absolutely no benefits (and NO evidence!) for the hospital to put on bed rest when my water broke. But were there any potential harms?

Yes. In observational studies, researchers have found that when lying down, the weight of the pregnant uterus compromises blood flow to both the mother and the baby (Huovinen and Teramo 1979; Abitbol 1985; Cyna, Andrew et al. 2006). Also, when a woman lies down during labor, contractions decrease in strength and frequency (Lupe and Gross 1986). It is important for a woman to have frequent, strong contractions in order to help the cervix dilate and the infant descend, and to aid in the progress of labor (Rooks 1999).

Furthermore, there is evidence that lying down in labor increases the length of labor and the likelihood that a mother will require an epidural. In a Cochrane review (Lawrence, Lewis et al. 2009) researchers pooled the results of 21 studies that randomized 3,706 women to either lying down positions or upright positions during labor. This review had several limitations—first; all the studies had different definitions of what it meant to be lying down or upright. Second, there was some cross-over between groups—some women who were randomized to be upright probably ended up lying down, and vice versa. There were other potential sources of bias in the studies as well. So we need to interpret these results with caution: the researchers found that labor was about 1 hour shorter in the upright group, and the upright group was also less likely to require an epidural.

When the results from the Cochrane review are taken into consideration with the other observational studies, the findings suggest that women should be encouraged to use whatever positions they find comfortable during labor—and avoid spending long periods in bed lying down.

So what should we call this hospital policy that required me to stay on strict bed rest during labor after my water broke? Is it evidence-based medicine? Evidence-based nursing care? Absolutely not. It was a policy based on superstition and fear of litigation—not based on evidence.

Did you find this article helpful?

Save 50% when you purchase our top rated Evidence Based Birth® PDF articles bundle.

Become a professional member and get complimentary access to all of our best Evidence Based Birth® PDFs!

What is the Evidence for Induction or C-section for a Suspected Big Baby?

Group B Strep in Pregnancy: Evidence for Antibiotics and Alternatives

Are IV Fluids necessary during Labor?