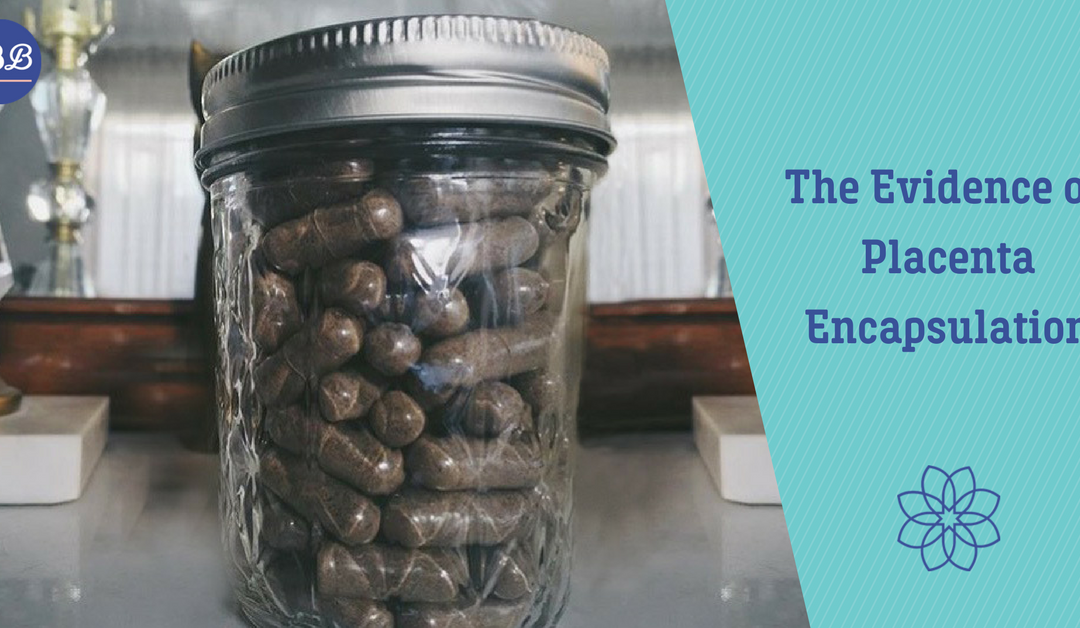 Welcome to the Evidence Based Birth® Q & A Video on Placenta Encapsulation!

Today’s video is all about the available evidence on placenta encapsulation. You can read our disclaimer and terms of use. 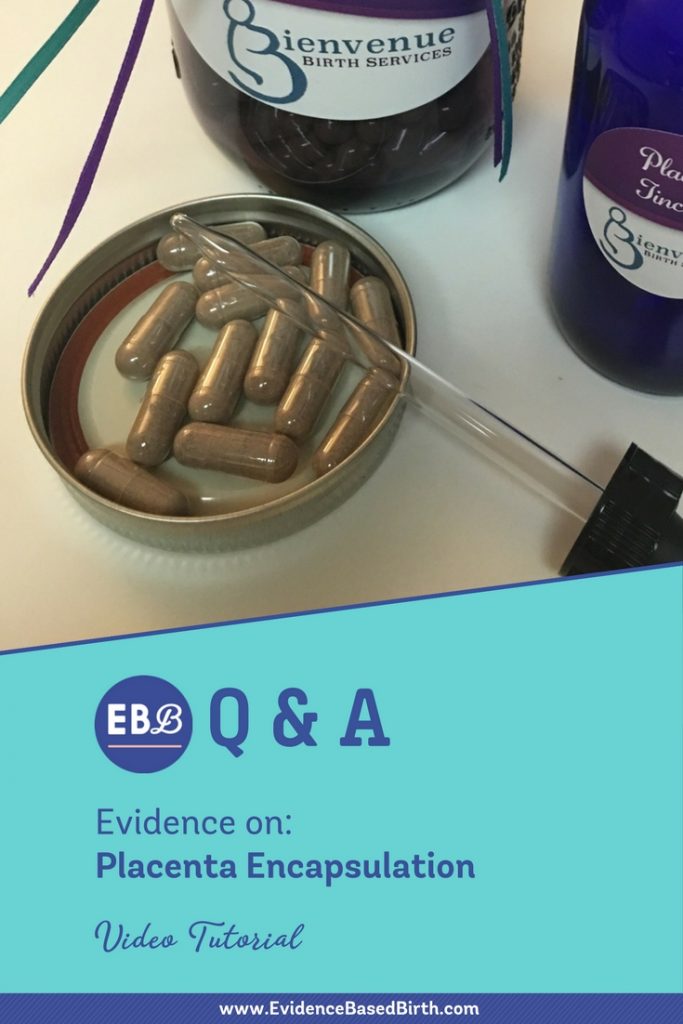 Hi. This is Rebecca Dekker, and I’m a PhD prepared nurse and the founder of Evidence Based Birth®. In today’s Q&A video, we’re going to talk about the evidence for placenta encapsulation.

The placenta is your body’s temporary organ that delivers nutrients and oxygen to the baby during the pregnancy, and it also removes waste for the baby. Up until recently, the only evidence we had on taking your placenta, dehydrating it, and putting it into little capsules — which we call placenta encapsulation — the only research on this came from very, very old studies. There was one very old experimental trial from 1918, and another one from the 1950s, and these were very poor quality studies and don’t really give us any valid information.

Many, many websites report that placenta encapsulation improves your milk supply, improves your mood, decreases your chance of postpartum depression or baby blues, and also, maybe, even increases your iron supply. However, many of these people report these benefits without giving any backing info, or evidence-based info, to back it up.

In 2016, two studies came out in which researchers analyzed the contents of placentas that had been encapsulated. In the first study, they chemically analyzed 28 placentas that came from donors who were nonsmokers. In this first study, they looked to see what kind of minerals were in the capsules. They found that the placenta capsules contained a modest amount of iron, about one fourth of the recommended daily intake of iron for breastfeeding women. That equals to about three ounces of chicken liver or three ounces of canned sardines. It also contained trace, or modest, amounts of other minerals.

There were no toxic levels of any elements that they looked at that could be harmful. There didn’t seem to be any toxic ingredients in the placenta capsules, which is good news. Other than iron, none of the other micronutrients reached high enough levels in order to make any kind of an impact on your body.

In a separate publication, that used the same dataset, researchers analyzed the placenta capsules for hormones. They looked for 17 hormones and they found that there were 15 hormones that were present in all 28 of the placentas. They found hormones like progesterone, estradiol, which is a form of estrogen, cortisol, aldosterone, and testosterone. Overall, the concentrations of the hormones were relatively low, but the researchers said that the concentrations of progesterone and estradiol could reach levels that could lead to physiological effects. However, this study wasn’t looking to see if these hormones had any effects. They were just looking to see if the hormones were detectable, and they were, for the most part.

This is the Journal of Midwifery and Women’s Health. It’s published in the United States by the American College of Nurse Midwives. I literally was just thinking about recording this video when this journal came in the mail, and I looked in it, and I saw that there is a new study, a randomized trial, all about the effects of placenta encapsulation.

Now, the important thing to know about this study is it’s very small. It was a pilot study, and its part of a bigger randomized trial that’s going on at the University of Nevada, Las Vegas. Researchers there are doing a large, randomized, placebo controlled trial to discover if placenta encapsulation has any effect on postpartum depression or not. This particular study that just came out in February of 2017 was a small sub study of that larger study where they’re looking at iron levels, and iron deficiency anemia, and whether or not placenta encapsulation helped with it. So let’s find out what they discovered.

In this study, there were healthy women who participated, and they were randomly assigned — like flipping a coin — to either taking their own placenta encapsulated or taking a beef placebo that was encapsulated. The two pills were identical looking and it was impossible to tell the different between the two different treatments. This was also a blinded study, meaning that the women taking the pills didn’t know which kind of pills they were getting, and neither did the researchers who were administering the pills to the women.

What they found is that most of the women had a decline in their hemoglobin levels, meaning trending down towards anemia, immediately after the birth, around day four, but then the hemoglobin levels went up at one week, and at three to four weeks, in both groups. Whether they were taking the placebo with beef or the placenta encapsulation, their anemia got better and their iron levels improved in both groups.

Now, this study is limited because it was very small. There were only 23 women total in the study. Also, it was interesting that the researchers did analyze the contents of the placenta encapsulated pills and they found that there was higher levels of iron in those pills. It must didn’t have any effect on the women’s iron levels and their hemoglobin levels.

Almost all of the women were eating diets that were sufficient in iron. Maybe they would have found different results if these women had iron deficient diets, where they weren’t eating enough iron in their regular diet.

Also, there’s a bigger study coming soon and I cannot wait to see what the results are for the larger randomized trial where they look at the effects on postpartum depression.

As you can imagine, it’s really important for us to have evidence on this topic, because placenta encapsulation is becoming more and more popular. As this trend grows, we need real, solid information about the pros and cons of placenta encapsulation. Right now, we don’t know if it has any effect on postpartum depression, and if any effect that it may have, may be due to the placebo effect. I look forward to updating you when more research comes out on this topic.